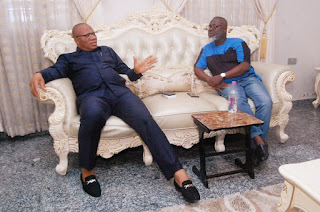 Dr Albert Okorogu, the Pioneer DG and CEO of the newly established electricity agency, named Imo state Power & Rural Electrification Agency(I-POREA) has stated that his agency has plans at bringing down the cost of electricity meters in all the 27 LGAs of Imo to 3000(Three Thousand Naira). He made this assertion recently in his office in an interaction with select newsmen.
Dr Okorogu, who was formerly the Executive Director, Networks, Niger Delta Power Holding Company (NDPHC) the SPV for Nigeria National Integrated Power Projects (NIPP) said the agency is developing a simplified and affordable meter for rural dwellers in the state which will cost less than 3000, this he said will help bring power closer to the people, because his agency's mandate is to electrify Imo state.

He maintained that the rural area is important to the governor, as it will help in no small measure, to improve the socio economic development, reduce crime and promote health, which will stop the use of kerosene, smoke generators, which has killed many in the past.
Dr Okorogu stressed that electricity at the rural areas will help to greater access of medical services, improve the sustainability of SMEs, increase productivity in the agricultural sector, and increase access to modern technology for better living, as I-POREA was established to enact policies to remove barriers that places electricity generation and supply in the state at economic, regulatory and institutional disadvantage as it relates to international best practice in the electricity industry.
Dr Okorogu said that the state government owns 53% of the agency while the 27 LGAs own 47%. He said the agency has started exploring the state rich endowment in natural gas, huge waste and alternative energy resources, which will aid them in generating the required power needs of the state, as immediately the agency was set up they went to work by interfacing with stakeholders electricity stakeholders, to unlock the associated bottlenecks for efficient power supply to the citizenry, especially the rural dwellers, and also create an enabling environment for Private Public Partnership, an investments in independent power projects (IPP) to quicken innovative green technology power models suitable for Imo state, while working with the Federal Government Rural Electrification Agency to support the federal government's Climate Change policy under the Paris agreement.
Continuing, Dr Okorogu said it was for this reason that started with  accessing the status of current electricity supply in Imo state, and found out that 500 communities in Imo have not had electricity for over 7 years, which was mostly due to nonpayment of electricity bills, especially estimated bills because of the non availability of meters, failed transformers, dilapidated and moribund feeders among other factors. He however said that help is on the way as his agency in collaboration with EEDC has started the replacement of failed transformers and have so far replaced about 79 of such transformers, with plans to get more to fully energize most communities that have been cut off from electricity supply. He said they will soon embark on sensitization visits to rural dwellers to intimate them of the need to protect electricity infrastructure against vandals.
On the current electricity supply to the major towns of Imo which are Owerri, Orlu and Okigwe, Dr Albert Okorogu stressed that the current status of power supply in Imo stated is limited to generation, transmission and distribution shortfalls because of the deficiency in infrastructure. He lamented that there are no generation power plants in Imo state, as the only source of supply is the 125MW capacity supplied through TCN Owerri 132/33KV Substation at Egbu, as the 338MW gas fired power plant started in 2005 at Egbema is yet to be completed after many years. He highlighted that there are limited transmission grids in Imo state leaving a majority of Imo citizens without access to electricity, as the only transmission lines are the double circuit 132KV lines from the 132/33 KV substation at Egbu.

He attested to the fact that transmission stations in Imo state would have help in a very big way had it been they were completed before now, and urged that these transmission stations which are TCN Abor Mbaise 2X 60MVA, Ideato 2X60MVA, Okigwe 2X30MVA/40MVA,xand NIPP Orlu 2X60MVA. He said when these transmission stations are working in full capacity, Abor Mabise substation will restore 90% availability of electricity to some parts of Owerri, and most communities in and around Mbaise, while Okigwe will restore 85% availability to most communities in Okigwe and Orlu axis, especially Onuimo, Isiala Mbano, Ideato North and South, and parts of Mbaise where supply had been non existent.

Dr Okorogu said that so far more than ten serious international companies, with local presence in Nigeria, very desirous of exploiting the natural gas in the state to generate captive power to supplement the epileptic power supply in the state.  Some are even proposing trucking in compressed natural gas in the interim while they wait for the completion and development/construction of the natural gas pipelines in the Asa and Ohaji/Egema/Oguta axes.
"We are closing in on negotiation with some of these companies.  We shall have full participation of the local distribution company, EEDC in a Special Purpose Vehicle (SPV) arrangement since their local network could be used to wheel out the generated power, besides controlling, by law the electricity supply industry in the region where the state is located"

Dr Okorogu further said, that "the vision of the Agency is in line with the very core vision of His Excellency,  Rt. Hon. Emeka Ihedioha, who in his superlative wisdom knew that the only way to lift Imo State out of the shackles of darkness was to create a unique power agency to provide the citizenry with reliable electricity"
He said it evident that in his rebuild Imo agenda, His Excellency has made it clear he would like to see an Imo State where moribund industries without access to the national grid are resuscitated and fully connected by means of Operation Light up Imo State Initiative of I-POREA. An Imo State that is digitally empowered as the Tech Hub of Nigeria because of availability of electricity, leading Nigeria in the fourth industrial revolution of robotics and Internet.
"His vision for Imo State is that state, through an enabling environment, that creates SPVs for IPP and PPP with investors participation. A state where at least 1000MW is generated from Grid/IPP/PPP/Alternative Energy to fully industrialize Imo state, and fully privatize the electricity market.  A state where at least hundreds of SMEs and thousands of cottage industries are spurred, where reliable access to electricity to thousands of schools and health clinics are provided. A state where thousands of jobs are created in the electricity supply chain and several thousands of Tons of carbon dioxide are avoided with earned carbon credit."
Dr Okorogu concluded by saying that " I-POREA, will align itself with the vision of His Excellency and join him in the Operation Lightup Imo State Initiative"
Email Post