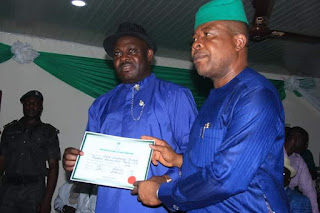 I have long waited for a time like this, to pour out my mind, on the sham which ended today in our dear state Imo, which many people saw as a government. The happenings in the last 8 years have shown Ndi Imo, that its proper we become actors in the political endeavors of the state, rather than being passive, which contributed 100% to Rochas Okorocha pocketing the common wealth of Ndi Imo, while we looked the other way.

Imo state in the last eight years was ruled by a tyrant who never followed the right channels of government protocol, a government that jettisoned the constitution of the Federal Republic and resorted to lawlessness and outright disobedience of the rule of Law. We pray we never witness in our life time a government that dismembered all the structures of government and civil service in Imo state. A government that destroyed the hegemony that bonded us as Ndi Imo, while we all kept quite.

It is worrisome that so many things went wrong in the state without our people forming a stiff opposition to the sham.  How can we have allowed a government that was not able to pay its workers, and pensioners, to be building projects for the Federal Government, of what economic importance is that to us?

We need to rally around H.E Emeka Ihedioha to look into every sector of Imo economy, social and political life, and proffer solutions on how to move forward towards empowering our people meaningfully. The new government has to revive our educational sector which is in coma. The health system in the state is laughable, despite the #30 Billion spent on building new hospitals in 27 different locations in the state. The PDP led government of H.E Emeka Ihedioha needs to be helped in building our businesses, and industries to drive Imo economy which is more a less a civil service state, where workers and citizens alike only hope and pray for Federal allocations to come for them to share and wait for another one.

The new government should do as much as possible to bring the youths under one umbrella, because the immediate past government took them for a ride. Creating of employment opportunities should be the hallmark of this new administration in the state, while sports as a uniting factor should not be left out.

We should take our destiny's into our hands by cooperating with this new administration, because the whole administrative structure of governance in Imo was messed up by a mediocre who taught he knew it all. I, know many with bash me for calling Rochas Okorocha mediocre. Yes he goofed in so many instances and miscalculated in different fora. Some clapped for him, for the block work done in Imo state and I weep because what he spent in 8 years was never near the allocation he got.

No productive venture was done by Okorocha in his 8 years of misrule. There was no sustainable project done by Okorocha, and someone wants me to clap for him. Show me a landmark project attracted by his government, where at least 500 Imo people work in. He should be asked what happened to Adapalm, what happened to other agricultural and industrial projects left by previous administrations. That era is done and dusted for good.

We should as Ndi Imo find solace that the new sheriff is a lawmaker, same with his deputy, and as such, we believe they will follow due process of governance, which Imo state was known for in the past. Our task as citizens will be to give him our support, to critic the government when need be and never to praise the government, rather to commend them when need be, because they were elected to serve the people which is their mandate.

As new leaders of the state, we expect to see the transformational touch of PDP governments in Akwa Ibom,Ebonyi, Rivers, Cross River to mention but a few.

We hope to see investors flood the state to help grow Imo economy which is rich in human and natural resources. We hope to hear from NBS that Imo in the next 18 months will be amongst the fastest growing economy in the country. We hope to see our brothers and sisters who deserted the state come back to invest and do business in Imo, (Imo nwere Madu, who say men no dey, men dey)

In all, we pray that with our support, God will give this incoming administration the grace to set Imo in motion again, through the re building of destroyed structures of government to the glory of God.

Chigozie Igbo Jr is the Editor In Chief of Nigerian Notch Newspaper. He writes from Abuja.
Email Post