The New YPP, The Advent Of A Green Era In The Political Landscape Of Nigeria 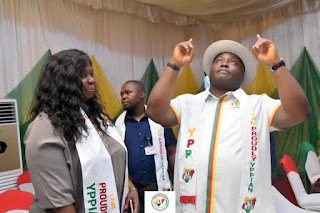 A few days ago,  the YPP had a Special National Convention in Abuja where it added green leaves to its symbol and logo and also approved a few other positions notable amongst which is  a position on the National Working Committee for an office of an adviser incharge of matters affecting the  disabled members of the society.

Last Saturday's event  went  down in the history books as the first time a political party would build its ideologies on how to rescue Nigeria from  the gutters where bad leadership dumped it.

The colour green in the Holy book  is associated with everlasting life , growth, and fertility. It also signifies fruitfulness. Green Leaves depict hope , renewal and revival. A cursory look at the historical significance of our National Flag as designed by Pa Michael Taiwo Akinkumi also shows that the green stripes represents the wealth in the country.

Our Nation, Nigeria  is filled with abundant human and natural resources and has the deficit of good leadership as the major  bane holding it down

The Young Progressives Party (YPP,) a convergence of  vibrant young minds filled with  youthful  energy is set to become  a rallying point for the masses in their quest aimed at taking their  collective  destinies in their hands and ensuring that  they end bad governance and mindless looting by self centred political leaders . It is a promise of a status quo change that is poised to sweep through  the Nation like a Tsunami.

The YPP is repackaged and ready  to serve as  a credible alternative to the two main political parties with an army of   youths ready to take full charge of  and determine how their affairs will be directed going forward.

The  green leaf ideology is geared at setting Nigeria on  cataclysmic development pedestal. It's no longer rumor that Nigeria is finding it extremely hard to finance  its budget as a result of the dwindling fortunes in the oil sector. Nigerians are also aware that the country has gone into recession once again at a time when the prices of oil in the international market is taking a free fall .

The future of the once oil rich Nigeria presently looks bleak but with the advent of the  YPP and its green ideology being the outcome of  carefully researched policy  plans for the Nation's  future  economic revival via an agricultural  and industrial based revolution,  the future is bright.

Nigeria is blessed with rich human, natural and agricultural resources. YPP's green open door revolution promises a return to our glory days where the groundnut pyramids in kano were the  wonders of the world, where the palm oil plantations in the east as well as the cocoa plantations  in the West  provided not just jobs but also provided foreign exchange to Nigeria.

The new dawn, the green revolution we seek has finally come .

Like the sun, it is set to rise from the east, and spread  to other parts of Nigeria. With Distinguished Sen. Dr Patrick Ifeanyi Ubah as the flag bearer of the YPP in the upcoming governorship polls in  Anambra state, the flag of YPP  is set to fly at Agu Awka with the #GreenOpenDoorRevolution sweeping through the state under the focused guidance of an idea bearer and capacity laden youth .

Believe it or not Anambra would vote YPP in 2021. It won't be the first time, in 2003 it voted APGA, a new political party in display of the level of sophistry that the people of the state has when it comes to political awareness.

APGA has since derailed and abandoned the vision of the founding fathers and has in return found itself  totally abandoned by the state's stakeholders as well as Ndi Anambra.

The promise of a new dawn has come  ..

The youths of the Nation has finally made the decision to take their destinies in their hands and redirect the ship of State from imminent crash .

The YPP is the vessel  .