Panthers sports club Nnewi, recently celebrated with their members who added another year to their age in October 2015. The event over the years has come to be a tradition, as members born in a particular month are celebrated, because of the unity of purpose, members of the club exhibit in associating within themselves.
It was a time of joy for Chief Chuka Oforma and Barrister Ike Obeta, who took turns to merry with members of their club.
While interacting with Chief, Chuka Oforma, he thanked God for making it possible for him to add another year to his age, despite all the ups and downs associated with growing up and family life. He thanked panthers sports club members, for finding time to celebrate with him, and prayed that God will also allow them to add to their ages soon. Chief Chuka Oforma who hails from Oraeri, is a business mogul who trades in Fairly Used motorcycles. He has in the past exhibited great dexterity for sportsmanship, which he displayed during the last concluded FUNDA election.
It was also a happy moment for Barrister Ike Obeta, who is the legal adviser to panthers sports club. Barrister Ike, a man who believes in due process, transparency, accountability and integrity, was so happy for adding another year to his age. He thanked the members of panthers sports club, for the love they have shown him, and prayed that God in his mercy will allow for every of their member to add to their age. He congratulated those that celebrated in October with him, and prayed that God will continue to give them more life to fulfil their destinies. Barrister Ike Obeta is the legal adviser to panthers sports club and zenith bank plc
In the same vein, Chief Sylvester Chukwudi Onwasoizu, who also celebrated his 50th birthday, which was a golden one, thanked members of panthers sports club, for the love they have shown him, since he joined the club. He commended the wisdom of Panthers sports club.
It is however on record that Chief Sylvester Chukwudi Onwuasoizu, has over the years remained in the envy  of many, because of his many achievements in life, little wonder, he was honored by Legend Media Network, a notary organization based in Ghana, for excellence and selfless services to the health sector, which has made him a figure to reckon with in the Nigerian hall of fame.
Chief Onwuasoizu, is philanthropist of repute, being reason, he is showered with the accolades of Oji uno eme ogo, obata uno adi nma, Ajee ugo dina obi, nwanne di na mba na agwu, ugbo nyirir mba na Nnewi, okpote mba na Umuawuli, and many more.
He is also a senior stakeholder of divine friends club Nnewi, House friends club Nnewi, Okija Inn-House Club, and Okija Great elites assembly, which Obijackson is the president.
He is an accomplished business man, whose dedication to duty has transformed his endevours into success, as he is today the Chief Executive Officer of Syreon Ce Pharmaceuticals Co Ltd
The highlights of the birthday celebration was the cutting of cake by the celebrants, while the members wished them the grace to add another year to their age, to continue with the good works they have started.
In his speech at the event, the President of Panthers sports club, Ichie Ojimba Anaeto, thanked God for the lives of their members who added another year to their age.
He stressed that Panthers Sports Club Nnewi, has it as a tradition to celebrate their members. He said that it is not an easy feat, for one to add to his age, and called on all members to thank God for their lives, and wished them long life and prosperity. 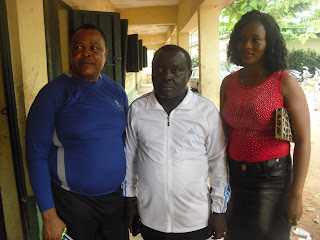