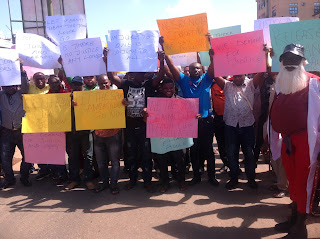 Youths of Nnewi community in Nnewi North Council Area of Anamnbra State, today, staged a peaceful protest, demanding the release of Dr Patrick Ifeanyi Ubah over the continued incarceration of their brother, the chairman of Capital Oil and Gas Industries Ltd., by the officials of the DSS.
The youths, under the aegis of “Nnewi Youth Forum”, carried placards and marched through major streets of the industrial city chanting songs depicting anger, and frustration over the continued detention of their brother and mentor.
The youths carried inscriptions in some of the placards which read: “DSS, obey court order”; “Please, take Ifeanyi Ubah to court, we are in a democratic state”; “This is democracy, not military rule”; “Is there no more respect for rule of law and human right in Nigeria?”; among other inscriptions.
Addressing newsmen after the rally, the President-General of the group, Hon. Onyekwelu Udeze; flanked by the Secretary –General, Prince Ezenwa Nwachukwu; noted with grief and displeasure, “Nnewi Youth Forum condemn in strong terms the continued detention of Dr. Patrick Ifeanyi Ubah by the DSS, without trial”
“We have watched with keen interest the harassment and detention of Dr. Ifeanyi Ubah by DSS, a government agency that has no bearing concerning the business transaction with NNPC where both parties have claims, because its not the statutory responsibility of the DSS to venture into such.
“It is now public knowledge that some persons or agencies have vowed to nail Dr. Ifeanyi Ubah by all means, considering the fact that Anambra state is in a political year, due to the gubernatorial election coming later in the year.
These enemies of progress have not come to terms with the historic success and contributions of Dr. Ifeanyi Ubah to nation building, economic growth and job creation, particularly among the youths.
“We condemn a situation where people are detained before investigations are carried out on the issue leading to their arrest. The refusal of DSS to respect a court order is unconstitutional and falls short of the expectations of we the youths in Nigeria, as what they they  DSS have done  begets the very foundation of our legal system. This breeds impunity, nepotism, and no reasonable government will condone it.
“We wish to emphatically state that the DSS should obey court order and arraign Dr. Ifeanyi Ubah to court or release him without further delay”. “ As that remains the only way justice can be seen to have been gotten, because those that come to equity should come with clean hands.