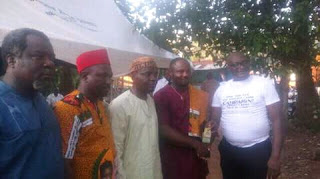 Hon Prince Nnamsom Nwafor Orizu, the former Chairman, committee on petrol eum resources in Anambra state, and the present special assistant to Chief Dr Willie Obiano on youth entrepreneurship has returned to APGA with pomp, as APGA members in Otolo ward 1, in Nnewi North L.G.A welcomed him back in an event that was well attended by APGA party stalwarts, with representations from Anambra state government and the zonal leadership of APGA in Anambra South Senatorial zone.


In his keynote address to members of APGA, Hon. Nnamsom Nwafor Orizu, stated that he resolved to return back to the APGA family. After due consultations with major stakeholders in Anambra project. He said that after due consultations, with family and close political associates, he decided to reconcile with His Excellency, Chief Dr Willie Obiano, and other APGA party stalwarts to join hands in returning his Excellency to a second term in office.
He therefore renounced and retraced his previously held views, which he termed negative against the state government, and promised to work hand in glove to support the progressive government of Chief Willie Obiano, which is anchored on Agriculture, commerce and trade, industrialization and oil & gas.
He however urged his followers to follow him in supporting the activities of Chief Willie Obiano to achieve the desired goal of good governance in the state.
While addressing the press, Hon. Nnamsom Nwafor Orizu, opined that the solidarity and goodwill exhibited by APGA stalwarts and stakeholders in the state during the funeral of her two sisters, Princess Dr Udunna Nwafor Orizu and Princess  Chinwe Nwafor Orizu touched him, and became a food for thought, to him and most members of the Royal family, which he considered a great honor for the family of former President of the Nigerian Senate and acting President of Nigeria Dr Abyssinian Akwaeke Nwafor Orizu.
Continuing, Hon. Nnamsom Nwafor Orizu promised to use his new position in government to reposition the collective interest of youths in the state, so that the entrepreneurial initiatives of the Obiano administration, which will be harnessed to stop crime and criminal activities among youths in the state, by engaging the youths through wealth creation, and psycho social course modules, with business innovation centres across the 21 LGAs of Anambra state, to better the lives of youths in Anambra state.