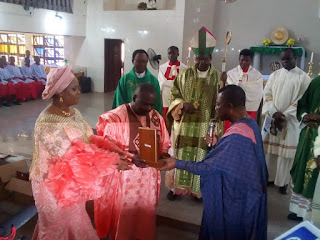 In a sermon earlier, Bishop Ezeokafor, the Catholic Bishop of Awka diocese thanked God for the life, of Chief Dr Hon Okwudili Ezenwankwo, and his service to Anambra state, his people in particular.

He stressed that he is proud of Hon Okwudili Ezenwankwo, who he said is his kinsman as he is from Nanka. He called on him to continue with the good works he has already started, and promised to assist his efforts with prayers.

He urged government officials at all levels to listen to the people and be steadfast in thinking of what to do for the people always, to stop crisis in the country.

He also thanked government for the good healthcare,  Schools and other infrastructure in the state, but however pointed out that the issue of roads needs urgent attention and asked the governor to take palliative measures to control it.

Continuing, he preached for truth and peace in service of humanity as he admonished government officials to be steadfast in leaning to the truth always and at all cost. He stressed that they should emulate the peace of Christ which is based on principle of good conscience and ethics. He therefore called on Christians to always note that heaven is their target.

He tasked on the legislature to remember that Nigeria is a secular state, and asked them to uphold the tenets of the Nigerian constitution, with regards to religion in the country.

Chief Hon Dr. Okwudili Ezenwankwo, the celebrant was overjoyed and elated for the crowd that witnessed the event. In his thanksgiving speech, he said "this day is a great day in his life. He said that he promised God that if he finished serving the people in the market he will give back to his society by active representation" .

He thanked God for his successful election and inauguration. He maintained that he is going to change the face  of representation in his constituency. He stressed that he will impact positively on the lives of the business community in Nigeria, especially traders.
He  however said that the issue of the dry port must be achieved to ensure that there is market liberation in the South east, and also promised to tackle the issue of extortion of traders at the head bridge, as it  will be a thing of the past soon.

He thanked Bishop Most Rev  Ezeokafor, the kignits of St Mulumba. He commended Chief Willie Obiano and welcomed him to Holy Trinity Catholic Church Nkwoagu Nnaka. He stressed the obvious that Anambra remains the safest state in the federation. He thanked the governor for the support he gave to him during the election, which is immeasurable. He went further to applaud the speaker for sending a high powdered delegation from the national assembly. He also thanked members of Anambra state of Assembly for the good works they are doing and tasked them to remain steadfast and resolute.

In his remarks, the governor, Chief Willie Obiano thanked God for the people of Nnaka,  Bishop Ezeokafor and Chief Dr Okwudili Ezenwankwo for their steadfastness and support to his government. He said he is very happy for Hon Okwudili Ezenwankwo, that the attitude of gratitude is dignifying, and that is why he came. He commended him for his able leadership strides right from his days as a market leader, and urged him to remember that Orumba Federal Constituency is in need of good representation to help develop his constituency and Anambra state.

He disclosed that he is about to lunch operation kpochapu in Anambra state, to ensure that security in Anambra is garateed with help from a security outfit in Boston, with equipment that has 6 megapixel which will be stored on icloud.

On the challenges of the herdsmen, he stressed that they have been handled appropriately, and the government is determined to show them the way out, especially those destroying farms in Anambra state.

He reassured the bishop that the issue of prayers in the market is not the way it is, as the issue of prayers in the market had not been stopped.
On the issue of roads, he said Anambra state road maintenance agency is on it, but because of the rains, it seems everything has been slowed down.
He stressed that the future of Anambra state is in the north of Anambra state, because that is where oil and gas of the state is, same with the agricultural base of the state.
The younger brother of Hon. Chief Okwudili Ezenwankwo, Chief Emma Ezenwankwo( Nkponana Nnaka) thanked God for the life of his brother, and prayed that God with see him through the task ahead, because God is the only one that crowns kings and at the appointed time it happens. He therefore called on the good people of Nnaka to support him to achieve his expectations for the people. He thanked everyone that found time to be with them, especially the governor of Anambra state, Governor Willie Obiano and the Bishop of Awka diocese, while appreciating others as well.