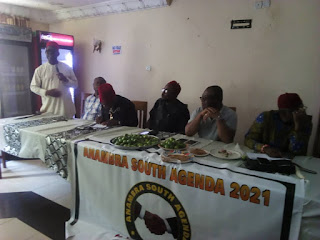 
In his keynote address the National Convener and Coordinator of the group, Venerable Chris Orajekwe, thanked the members of the group for coming out enmasse to witness the coming together the actualization of their dreams towards the instilling good governance in the state.


In the same vein he said, " 2021 is another election year when all Anambrarians will take a firm decision on the zone and person that will steer political and socio-economic destiny of the state. It is a paradoxical year, and it is incumbent upon leaders like us to face the challenges that it brings, so as to unravel the complex contents and give the state a definite and sensible direction.


He recalled, that in 1991, a re-organization of the old Anambra, bequeathed a common destiny to all Anambrians and Anambra South zone got a fair share of 7 LGAs out of the 21 LGAs in the state. He stressed that within these years of Anambra political history Anambra South zone contributes the biggest in emerging cities of Nnewi, Ekwulobia and Ihiala, which has made both political and economic sacrifice for equity, justice and progress of the state, and its only fair to allow the zone to produce the next governor of Anambra State.


He lamented that since the inception of this present democratic dispensation the zone has supported both the central and Northern zones and has been the determinant factor for the emergence of all the governors that have steered the affairs of the state including the incumbent.


Despite all these sacrifices, the zone has only ruled the state for 6 years out of the 28 years of her democratic existence he states.

He said that Anambra South Agenda 2021, is not a political party, it is a movement to ensure that the overwhelming interest of all Anambra electorates that are looking unto the zone to produce the next governor transcend the wish of average politicians.


He further went on to say that " It is moral and palpable resolve that other zones—the North and Central will be looking unto us to make a choice. The choice of sustainable development over “stomach infrastructure”, the choice of being the King over “perceived king maker”, a choice of making rational decisions among competing political ideologies to produce the next governor of the state over unnecessary rancor and disunity. When we all believe in the principles of justice, equity and fairness, moving the governorship position of the state to the southern zone is non-negotiable"


He concluded by stating that for "Equity, Fairness and Peace, Anambra South zone citizens must go beyond the visible,  swim beyond assumption and must never underestimate the politicians from other zones.

Adding his voice, to the call for Anambra South to have the governorship seat, High Chief Aniazota Zokas, said that its only fair and just that Anambra South gets the support of other zones in this cause, no matter the political affiliation of the candidate. He called on the stakeholders from Anambra to go for the best, to ensure other zones truly support this cause for 2021 governorship in the state.

Chief Damian Okeke( Mbueze Nnaka) while adding his voice said that the position Ohaneze has taken in form of zoning is same with that of Anambra as they have ascribed to the fact that the governorship is coming to the South after the completion of the tenure of Chief Willie Obiano.

He said that its incumbent on the people Anambra South to come together and form a formidable force towards the the actualization if this cause. So that they don't constitute a problem or become cog in the wheel for this cause.
Email Post