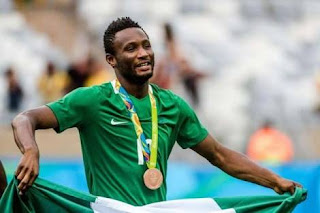 Our son and former skipper of the Super Eagles John Mikel Obi was a "victim" of Covid-19. He did not contact the deadly virus....but got into trouble for speaking his mind and those of hundreds others out there in Turkey.

His club Trabzonspor frowned at his comment and asked him to retract his statement but Mikel refused on ground that he did the right thing. Below was Mikel's comment that got his club angry.

“There is more to life than football. I do not feel comfortable and don’t want to play football in this situation. Everyone should be home with their families and loved ones in this critical time. Season should be cancelled as the world is facing such turbulent times.”

And after the club met with Mikel, it came out with this statement. "The professional football player agreement between our company and John Obi Mikel has been mutually terminated. With the mutual termination agreement, the football player gave up all his future earnings".

Today Mikel forfeited all his remaining entitlement with Trabzonspor. He even left over 17 months of his remaining contract period. He signed last summer to leave the club by August 2021.

Mikel was unselfish in his comment. He saw the situation on ground and the reality that is catching up with the world....and decided to be his brothers keeper. Calling for the League in Turkey to be suspended is not a crime after all, major football bodies have put football activities on hold over Covid-19. Therefore, Mikel should be hailed for his stand....especially for sacrificing his entitlement for lives to be saved.

Yes, Mikel's call is for lives to be saved. The concern of the world is for safety and health. He needed to draw the attention of Turkish football authorities to the prevailing situation. They had to be sensitive to the cries of the world. They cannot be acting in isolation.

Only a player who has seen it all like Mikel could speak up in such circumstances. He has featured in two World Cups and five AFCON tournaments. He has won the AFCON, bronze medal at the Olympics, Champions League, Europa League and all major trophies in England.

With the Turkish League now suspended, perhaps Trabzonspor and the Turkish FA should tender an open apology to Mikel. His contract should not only be reviewed but additional years allowed. He is the true face of Turkish League at the moment and should be appointed Ambassador of Turkish football.

From the Catalyst....Mikel gets a new nickname from Yours Sincerely....He is the Brave Heart.
Email Post