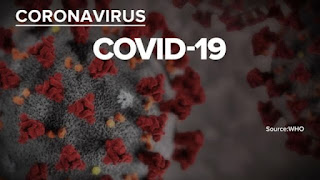 The Kingdom of Saudi Arabia was the first to announce the cancellation of pilgrimage to the kingdom over the fear of Corona Virus. The virus is not a respecter of any stone throwing at the devil. It will consume both the stone and the person throwing it. The virus is the known devil and it’s not respecter of anything.

The Vatican has also announced the cancellation of this year Easter celebration in their holy city because an unholy virus that is ravaging the city. The virus is not a respecter of sacraments or Holy Communion.

Ghana has banned all religious gathering for the next four weeks. No one will go to church for four weeks in that country and heaven will not fall. A devil is out of a science lab and it refuses to die by Holy Ghost fire.

In Lagos, Governor Sanwo Olu, has also announced the suspension of all religious gathering of more than 50 people in the state. All prayer and fasting will now be done indoor. Daddy GO, Pastor Enoch Adeboye of the Redeemed Christian Church who earlier bragged  that none of his members will be affected by the virus was the first to comply with the Lagos State Government’s directive asking his members to observe only house fellowship until the science comes up with the solution.

Interestingly all the medical laboratories in the world are open with scientists working day and night to save the world from a virus that can wipe out the entire humanity before the second coming of Jesus Christ.

This situation brings us to the age long debate between Religion and Science. To some who believe that Science is God, this is their proud moment and to those who believes everything their priest tells them this a moment for a rethink and that is on a personal note.

On a general note and particularly in Africa, this period present us a unique opportunity to review our investments in religion and science and chose wisely.

In Africa, we have become so religious that no other things matter anymore. People do night vigils every day; they fast and pray 365 days a year. They become weak and tired, spending too much time where there is little or no solution.

Now that trouble has come to the world, where do we look up to Science or Religion? How many of our miracle working pastors can come out and look at corona virus in the face and command it to go, like the way they command HIV and other forms of diseases. They dare not!

I am not saying there is no place for religion in the human existence but the amount of energy and investment in religion in African does not match the goodness it brings to our society.

The Boko Haram Terrorists are killing in Nigeria North East in the name of their religion. Nigerian government is spending close to N 1 billion naira daily to fight this evil created by religion and its addicts.

I am not sure if there is any Teaching Hospital or Research institute in Nigeria who has access to this kind of money that Nigerian government is using in fighting the virus of religious bigotry.

Americans government believes in God, they said it all the time 'In God We Trust'. President Trump even declared a national day of prayers last week but there is a place of religion and science in their activities. When America needed to kill a terrorist troubling the peace of their land, they did not declare a day of fasting and prayer. They went into their laboratory and brought out a drone that can secretly go and do the job, even outside their territory. Science did it for them not prayers. There are many thing Science and Technology can do if we concentrate our energy on it.

With the way religious activities has taken over all our civilization in Africa when trouble comes all these foreign religion might not be able to save us but science will; that is why we need to set our priorities right and invest more in science and less in religion.