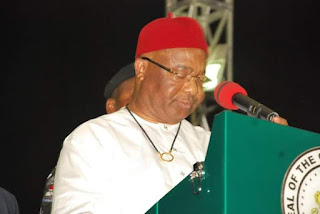 Imo Governor, Senator Hope Uzodinma has charged his newly cleared appointees to shun corruption, and embrace his 3R mantra, Reconstruction, Rehabilitation and Recovery, tasking them to work assiduously towards achieving results or be ready to be shown the way out.

Governor Uzodinma who spoke on Thursday while flagging off a three-day Induction Retreat for the Appointees and other top government officials tagged “Re-energizing Imo: Towards Sustainable Development – A collective Action” at Imo Concorde Hotel, said,
“Let me make it abundantly clear that my government has zero tolerance for corruption. Anyone of you involved in corrupt practice will not only be removed from office, but will be handed over to the relevant Security Agencies for prosecution. I am aware that some government officials are already tinkering with the idea of circumventing due process in the conduct of government business. Let me reiterate that anyone caught will be a sure candidate for the EFCC,”

The Governor however reminded the Commissioners designate, Special Advisers and Senior Special Assistants that, they were appointed on merit as “Team New Imo” and Apostles of shared prosperity.

He urged them to shun corruption and show commitment to duty, while asking them to show total loyalty to Imo people and his government.

Governor Uzodimma admonished them to forgo their personal relationships with him,  as it is now time for governance, not friendship, stating the obvious fact that they were selected from among so many qualified persons on their individual merit.

The  governor said “You must consider yourself really privileged to have made the list of the New Imo Team. I painstakingly chose each and every one of you on merit based on your commendable pedigree and commitment to our struggle. To retain thid membership will depend on tenacious commitment to duty, result driven performance, manifest honesty and undiluted  loyalty to Imo people and my Administration.


The governor who further reiterated that he was focused on anchoring healthy policies aimed at eradicating poverty, enhancing productivity, providing quality education, security of lives and property, among other dividends of democracy, called for sacrifices and maximum dedication”.

Governor Uzodimma disclosed that the retreat was intended to properly align the appointees with the policy objectives of his government so that they can hit the ground running as members of one team.

While tasking the New Imo Team on commitment to duty, the Governor said: “You are automatically the apostles of the shared prosperity agenda which is the mainstay of the vision of my administration" He noted that Imo State has lost so much ground as a result of selfish and inept leadership of the past.
He stressed that,  Imo State has not been very fortunate with visionary leadership for many years now. He opined that he intends to break that jinx with his well mapped out manifesto which is anchored on the 3Rs of this administration, which is Reconstruction, Rehabilitation and Recovery, which he said was lucidly outlined in his maiden broadcast of January 20, where he outlined the policy/manifesto of my administration i.e. THE ECONOMY, THE BUREAUCRACY, EDUCATION, GOVERNANCE AND SECURITY.

The retreat attracted resource persons who are experts in policy formulation, economic and social engineering, rule of law and accountability.
Email Post