Just in: Adams Oshiomhole Resumes,after skirmishes within the ruling party 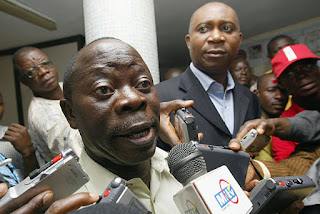 The National Chairman of the All Progressives Congress, (APC) Adams Oshiomhole, sang a conciliatory tune on Tuesday when he enjoined his colleagues in the National Working Committee to put the interests of Nigerians first.

He also suggested that the first post-crisis NWC should be devoted to “having a conversation around the coronavirus”.

Oshiomhole, holding his ‘rival’  Victor Giadom, said, “If it is one hour that we spend here, let us have a conversation around this issue.”

According to him, it should be an issue of concern that other countries were closing their international borders to contain the spread of the virus but Nigeria has yet to follow suit.

He explained that recent challenges the party have had to deal with were normal in a democratic setting.

Oshiomhole said, “Party Politics is about contestations. I am not the best chairman in the world and I don’t claim to be so, you can fault my style but you cannot fault my sincerity.

“The NWC is not divided. None of us seated here wants to destroy our party. My style is my style but I’ve learnt to reconcile my style with the style of others.”

The meeting, which is underway had most members of the 21 member NWC irrespective of which side they took during the crisis in attendance.

Members of the National Working Committee opposed to the National Chairman of the party, Adams Oshiomhole, have taken up their seats in the conference hall ahead of the crucial meeting.

However, Oshiomhole and those loyal to him are still locked up in his office holding a strategy meeting on how best to handle the day’s meeting.

Those at the meeting in Oshimohole’s office include Abiola Ajimobi, who is being touted as the replacement for Otumba Niyi Adebayo as Deputy National Chairman (South); National Organising Secretary, Emma Ibidiro; National Legal Adviser, Babatunde Ogala; the National Publicity Secretary, Lanre Issa-Onilu; and the National Vice Chairman, South-South, among others.
Email Post