SENATOR IFEANYI UBAH IS A BELOVED SON OF THE NNEWI TRADITIONAL STOOL. 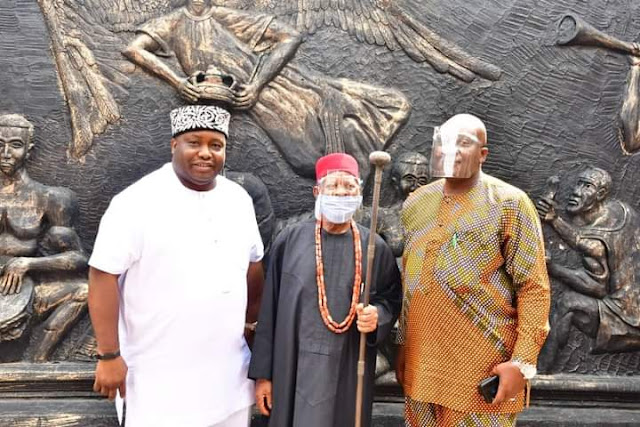 It was Christine Szymanski that said and I quote :

"Negative people exist on reactions from others ,it is their fuel to survive.

Do not give into the temptation to respond. It is not your responsibility to keep their tank full and yours empty".

But Edmund Burke also said that :

*The time has come for the well meaning people of Anambra  to call the wife of the Governor to order INCLUDING the two fellas of Nnewi extraction that she appointed SAs, who are being used to bring disrepute to Ndi Nnewi, by dragging their traditional institution to the mud, (at the appropriate time, they must face the consequence of their actions.)*

Today, from writing all manner of lies on a daily basis against the Distinguished Senator from Nnewi, (infantile write ups that people have continued to ignore). They have now graduated to subjecting  the great Royal stool of Nnewi to ridicule, by deliberately penning a story drenched in falsehood to which they went ahead to attach the pictures of His Majesty the Igwe and splashed it on their Facebook pages .

*The only joy derivable from all these shenanigans is that the main culprit and sponsor  of this highly irresponsible group known as Afa igbo bu ofu (a poor imitation of the Popular Afa Igbo Efuna Movement) only has barely a year and few months to exit office as wife to the Governor of the state*.

One could not help but wonder at the level of ingratitude, irresponsibility and crass pettiness, that will make a Governor's wife, whose hubby was able to win his second term in office thanks to the structure (Afa Igbo Efuna Movement) but now decided to thank the owner and sponsor of that structure, by luring some irresponsible sons from  Nnewi, same town as the  sponsor to deliberately seek ways of tearing down the very same structure that they  rode with to victory.

These guns for hire, whose standing as true sons of great Nnewi town are suspect, went ahead to set up a counter group whose only mandate has since been to peddle false and malicious stories against  the Distinguished Senator representing Anambra South Senatorial Zone on almost a daily basis most times using fake accounts .

The question to ask them is , why don't they use the so called Afa Igbo bu ofu imitation group to carry out populist interventions just as the Afa Igbo Efuna Movement has continued to do all over the state and even extending beyond the state to the entire south East ?

*How come a group that enjoys Government backing could not  engage in any populist interventions for our people but will rather concentrate on writing concocted and perjurious stories about one man all the time ?*

Or is this a case of that  popular cliche' in the Panadol advert that  goes thus:

Today their madness has grown to the extent of reducing the revered stool of his Royal Highness Igwe Dr K.O.N Orizu to an object of ridicule and fake news peddling using their Facebook platforms.

*These obviously shameless, idle and misguided pen rousers, this time around came up with a fallacious story of a purported snub by the Igwe, on the Distinguished Senator, forgetting that the Senator is not just a Cabinet Chief and member of the Nnewi Royal Dynasty but one who has always ensured along with other prominent sons of the town, that both the Igwe and the cabinet members always stand out both in comfort, welfare and in their public appearances as royalties*

The biggest irony of it all was that this poorly weaved and concocted story was alleged to have taken place on a day that the Distinguished Senator was in far away Lagos State attending to numerous invitations from our people in Lagos seeking to identify with his good works by hosting him in their various communities and markets right there in Lagos State.

*This same revered Igwe Nnewi that purportedly snubbed the Distinguished Senator in their hallucinatory story was the same Igwe Nnewi that Senator Ifeanyi Ubah last paid a visit to, on the 11th of August when he in his usual manner went to pay homage before he left Nnewi after a prior two weeks visit to Anambra State to inspect the ongoing hospital projects billed for commissioning next month*

Attached are pictures snapped on the day of the visit as well as his picture with the PG of Nnewi, Sir Ugochukwu Udemezue who he also met at the Igwe's palace as well as Chief Tochukwu Obi and others

Attached also are pictures he also took with a group of Otolo people holding meetings in the Ibeto pavilion within the palace who on sighting him insisted on snapping pictures with their son in whom they are well pleased .

*These two Nnewi sons sponsoring this irresponsible group on the prompting of the Governor's wife whose only gift to them was making them a part of the now bastardized SA system in Anambra, may today think they are on the right track ,but they forget the Igbo adage that says na Nwa Nza N'ere  Oku ,Osi N'Obu Nmanu Ka Ona Aha ...... Meaning the recalcitrant bird flying over burning furnace furiously melts while under  the erroneous belief that he is glowing*

Just as Nzuko Ora Nnewi had warned them in the past, the end result of their activities will definitely haunt them in the nearest future, if they do not retrace their steps.

I am sure they have never bothered to ask the outgoing wife of the Governor what her plans are for them once their regime winds down and they return to Texas.

This is the last time that I will respond to the lies and fabrications from the highly capricious group that goes by the nomenclature Afa igbo bu ofu.

Long live the Distinguished Senator and friend of the downtrodden.