IMOLITES, NOT UZODIMMA, AFTER OKOROCHA 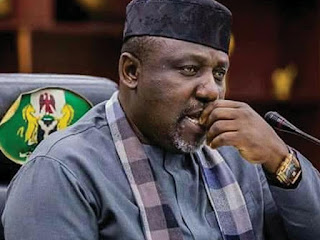 As Imolites continue to react to the former governor Rochas Okorocha's recent frustration, induced misguided outburst on a national television, Channels TV to be precise, wherein he accused Governor Hope Uzodimma of being after him as well as envious of his political achievements, it became imperative to subject the said submissions of the Ogboko born senator to critical scrutiny as to find out whether or not his successor in office is actually after him for any personal political goal.

Interestingly, the duo of Okorocha and his successor, Uzodimma, are not only from the same Imo West senatorial zone, but are senior stakeholders and members of the same political party, the All Progressives Congress, APC. As it is a norm in our present day political culture, former governor Okorocha,  to his opinion,   deserves all manner of executive protection from his fellow partyman to enable him enjoy the fruits of his labour with his family and cronies in peace, devoid any distractions.

For Okorocha and his few sympathizers and accomplices, it is unheard of and politically unreasonable, for a member of the same political party, to champion the investigation and possible prosecution of fellow partyman. Yes, in Okorocha's world, he deserves to be celebrated with a pat at the back for a job well done and not a call for account of his stewardship.

From his line of argument as he was been drilled by the sensational channel TV presenter Suen Okinbaloyo, it was obvious Okorocha was excepting nothing less a national civic reception for all he did within his eight years reign, including but not limited to his provocative conversion of both public and private land assets to personal and family uses, criminal distortion of Owerri master plan, substandard projects and littering of the entire landscape with economically unviable and uncompleted projects like street gates, street iron ornaments etc.

To his chargrin, instead of an invitation for a state organized civic reception, Okorocha was invited to give account of how he served his employers - the government and people of Imo State. What an affront? A magnanimous servant, who used his personal savings to serve and work for his employers. He even became poorer than he was, prior to his employment. A man who should be asking for refund of what is called in organizational structure as Out-of-pocket expenses from nde Imo, is finding it difficult to give account of his financial integrity  What a contradiction?

A deep analysis into the allegations as levelled by Okorocha against his "brother", one will understand that Uzodimma has no need to envy Okorocha. Except there is something we do not know between the two, because there is nothing Okorocha has attained that Uzodimma had not achieved before becoming a governor.

The crux of the matter,  is very simple and unambiguous. The Okorocha's expectation of esprit de corps was dashed by Uzodimma's uncompromising stands against business as usual, corruption and abuse of public trust,  irrespective of whose ox is goared.

In this case, Governor Uzodimma is not seating on an enviable position. For this situation, I do not envy him. Undoubtedly, he found himself on assumption of office in the middle of two contented forces. The former governor on one side and Imolites on the other side. The former governor is arguing that he served nde Imo with his personal savings as a private individual while the people are crying wolf that their treasury has been looted like covid-19 palliatives. While Uzodimma as an arbiter has two options available to him, either to sing along with his fellow partyman or to listen to the voice of the people. Conventional politicans interested in the next election will go for the former, while uncommon leaders interested in the next generation will opt for the letter and exactly what Uzodimma did, even though to the surprise and appreciation of all included opposition leaders.

As difficult as that decision is, Governor Uzodimma has continued to explain the audacity of his intentions and sincerity of his purpose, no wonder on many occasions and on different platforms he had stated unequivocally that he has no personal issues, be it political, economical or otherwise with his senator. In fact, in one of such platforms, Uzodimma was quoted as saying " He (Okorocha) is my senator and I'm his governor, I don't have any personal issues with him" And I quite agree with him.

The truth is, Uzodimma is a loyal, obedient and committed servant who is doing the bidding of his employers- the people. Uzodimma is holding the mandate of the people and must at all times listen to the yearnings and aspirations of the people. In other words, it is nde Imo that are after Okorocha and not Uzodimma. The people has mandated their governor to recover all illegally acquired public properties by the former governor and his family and friends. Also, to recover all looted funds, investigate all obnoxious contracts awarded to fleece our common patrimony. Uzodimma has the mandate of Imo people to restore sanity and public confidence in our government businesses.

It is very important that Senator Okorocha appreciates the sense of discipline as demonstrated by Uzodimma in calling him (Okorocha) a fellow partyman to give account of his stewardship as a hallmark of leadership and not a sign of political vendetta or witch hunt.

Imo must be Recovered, Rehabilited and Reconstructed.