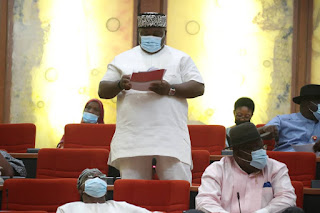 The Senate has urged the Federal Government to review implementation of the policy making it compulsory for the National Identity Number (NIN) to be a prerequisite for the 2021 Unified Tertiary Matriculation Examination (UTME).

Joint Admissions and Matriculation Board (JAMB) had previously insisted that NIN must be for the 2021 UTME. Based on that development, candidates have lamented the insistence of JAMB on the policy saying NIN requirement was adding to their registration hurdles as they were forced to go through extortion, long queues, and other unwholesome practices to obtain NIN to register for their examination.

The Senate in it's resolution therefore, asked the Ministry of Education, JAMB, and National Identity Management Commission (NIMC) to review the policy by extending the UTME registration deadline and NIN requirement until there is a seamless and well-organised process for obtaining NIN by candidates.

The senate also called on the Federal Ministry of Education and NIMC to introduce a simple and decentralised NIN registration process where students would be able to obtain NIN in their schools or  accredited centres. The resolutions were sequel to a motion by Senator Ifeanyi Ubah who said the NIN policy was an inconsiderate and premature decision that further complicated the already rigorous process of registering for UTME examination and procuring of NIN.

He said available statistics indicates that in 2020 more than two million candidates registered for JAMB and that the introduction of NIN could threaten to significantly lower the number of candidates for the 2021 examination given that majority of the candidates are just attaining the age they could obtain NIN.

“This is a brazen infringement on the right to education of young Nigerians who may not be able to meet the deadline to obtain their NIN and register for JAMB,” he said.

He however called for the suspension of the policy until the conditions for obtaining NIN improves.