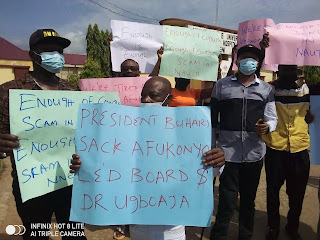 The protesters, who took to the streets of the industrial city, walked from the teaching hospital through the NITEL Junction, down to Igwe Orizu Road, displaying placards of different inscriptions such as: “No more sale of drugs in NAUTH,” “Much avoidable deaths are occurring in NAUTH,” “There should be enough drugs in NAUTH, why referring patients outside the hospital,” “Buhari should dissolve the Afukonyo-led Board in NAUTH, sack Ugbaja, the CMD; they’re the cause of problems in NAUTH,” among other inscriptions.

Speaking during the protest, leader of the protesters, who gave his name as Emmanuel Okoye, said: “The people you see here are patients, patient relations, and residents of Anambra State, and Nnewi in particular. We’re here to protest poor services rendered by NAUTH to patients in the hospital in recent time.

“To say the least, there is absolutely lack of drugs in the hospital; most painful among them is the absence of drugs in emergency section and theatre, leading to patients frequently asked to go outside the hospital to procure drugs. Surgical operations are being frequently postponed due to lack of materials in the theatre. This frequently leads to patients’ death in emergency situations. Wounds are being unattended to for days due to lack of materials for dressing.

“As patients, concerned Nnewi residents and interested parties, we are quite concerned and alarmed. We quietly started investigations to find out why NAUTH services are poor, including the physical infrastructure, despite huge funding from the federal government of Nigeria.”

But in swift reaction, the Chief Medical Director, CMD, of the hospital, Dr. Joseph Ugboaja, described the claims as frivolous allegations. He said: “There are drugs in NAUTH, and our hospital is functioning well. Go to the hospital and see things for yourself. I believe those organizing the protests and sponsoring all sorts of propaganda against the hospital are those that lost out at the CMD interview recently held in Abuja. If they lost out and want to seek redress, they should follow the appropriate channel; not to sponsor cheap propaganda. I will rather advise them to come together, join hands with me to build the hospital. All of us cannot be CMD at the same time – there must be winners, and there must be losers. “ he concluded.