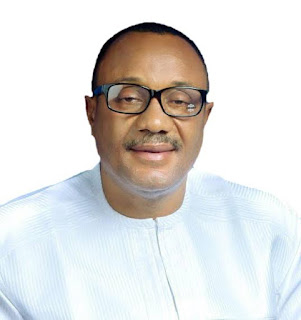 The Dr Chidozie Nwankwo Campaign Organisation has responded to a viral video on social media castigating his person. In a press release made avaliable to Nigerian Notch has the notion that it was a scripted narrative to tarnish the image of Dr Chidozie Nwankwo.

It reads thus "The attention of Dr. Chidozie Nwankwo Campaign Organization has been drawn to a carefully scripted but shamelessly choreographed campaign by some political desperados hiding behind the foolhardiness of some of their discredited foot soldiers to tarnish the image and vast goodwill earned by Dr. Chidozie Nwankwo, over the years, across Anambra State and beyond."

"The campaign of calumny and character assassination against Dr. Chidozie Nwankwo started with a video filled with outlandish fabrications and unprovoked insults wherein a lady who happens to be one of their hirelings was seen making very incredulous allegations against Dr. Chido claiming the frontline APC Governorship Aspirant has been going round boasting that he is wealthier than the entire population of the globally acclaimed successful businessmen and women of Nnewi extraction put together."

The statement continued by stating that, As a follow-up and to add a comic icing to the said video, another of their paid jobbers again went to town with a piece demanding an 'unreserved apology from Dr. Chidozie Nwankwo to Nnewi' for the funny "offence of claiming to be richer than them"!

"We want to state on record that Dr. Chidozie Nwankwo has never disparaged any Governorship aspirant from Nnewi or elsewhere nor derided the highly industrious people of Nnewi or any community in whatever guise or manner in the course of his well publicized tours across the state. It is never in the character of Dr. Chidozie Nwankwo to blow his trumpet as those who know him can boldly attest. He is an accomplished businessman by every standard, by the grace of God, and those who are familiar with him know he is also an epitome of humility, integrity and gentility despite his modest material and intellectual endowments. All his campaign tours and messages are focused on securing the support of the good people of Anambra State in his quest to build a new, better and greater Anambra we can all be proud of."

"Moreover, Dr. Chidozie Nwankwo has tremendous respects and admiration for the great men and women of Nnewi extraction who have in the past made Igbo nation, nay Nigeria proud in leadership, politics, business and academia, and those who have continued to make waves in their various fields of endeavour today. As a responsible citizen of Anambra State, Dr Chidozie Nwankwo is particularly proud of the unparalleled  contributions Nnewi is making to the economy of Anambra State in particular and Nigeria in general through her sons and daughters in industrial manufacturing and business."

The statement further stated that, these coordinated attacks against Dr. Chidozie Nwankwo do not come to them as a surprise, as it is obvious that some lazy political camps which are hoping for political glory on a platter are finding it difficult to cope with the wildfire-like progress their principal is making in the field, as they are unsettled by the burgeoning profile and sweeping acceptability of Dr. Chidozie Nwankwo across the length and breadth of Anambra State and are therefore resorting to smear campaign to malign him since they could not think of any fair means of executing their ill-motivated and malicious campaign of calumny.

"Unfortunately, these thoughtless schemes are dead on arrival. Dr Chidozie Nwankwo is the proverbial "ugbana edere uli, n'aru", whereby its whiteness shined brighter! It can only be God's grace. CHINEMEZE."

The statement concluded by urging his teeming supporters and all Anambrarians to disregard these malicious falsehoods and remain focused in it's great task of enthroning purposeful, accountable and development-driven government in Anambra State led by Dr Chidozie Nwankwo come March 17, 2022.