The member, representing Orlu Federal constituency at the federal house of representatives, Hon Jerry Alagbaoso has intensified calls for proper restructuring of Nigeria,for sustainable development in the county.
He made this call, at the university of Ibadan alumni association maiden lecture of Imo branch, with topic,restructuring and national development in Nigeria, under the distinguished chairmanship of Prof Jude Njoku, former vice chancellor FUTO,Owerri.
In delivering the lecture as the guest lecturer, Hon Alagbaoso, touched on major factors which has be deviled Nigerian nation since after independence, and proffered solutions on the way out. He said, the cause of agitations for restructuring is drawn from the establishment of decree no 34 of 1966, which abolished the federal system of government, which was however changed by the Obasanjo regime of 1979, though it retained the main features of a unitary system, he stressed.
Hon. Alagbaoso however stressed in his lecture that "for about a decade or more now, there has been agitation by individuals, geo-cultural groups and geo political associations for the restructuring of Nigeria".
He maintained that any lecture on restructuring and national development without recourse to the historical foundations of the past political, socio economic developments, happenings in Nigeria and the mood of Nigerians before the present day clamour for restructuring can only be likened to VIVIAN FOSTER'S book, Pearls of Wisdom which stressed that " the best Prophet of the future is past".
Hon Alagbaoso went on to point out in his lecture that the call on President Buhari for implementation of the 2014 conference proceedings is a pointer to the fact that the present government can no longer negate the feelings of Nigerians on restructuring or see it as mere agitations by advocacy groups or ethnic nationalities.
He opined that if proper federalism is practiced in Nigeria, the agitations in the country will no longer be heard,saying that an ideal federal system must have at least two levels of government with constitutional division of powers among the levels of government, each must be co ordinated and independent, must have financial independence,which will afford each level of government the opportunity of performing its functions without depending or appealing to others for financial assistance, and must have a supreme court of independent judiciary.
In essence, Hon Jerry Alagbaoso advocated for restructuring and national development in Nigeria, through reordering, readjusting, rearranging and critically examining the sub systems and functional components of the existing structure for a better socio-economic and political advancement of Nigeria, which is exactly what some well meaning Nigerians are clamouring for, which is a reformed structure that will jettison negative features and encourage positive ones in the country.
While interacting with newsmen after the event, Hon Jerry maintained that it will not take the executive, legislature and judiciary more than three months to amend the constitution, for restructuring of Nigeria to take place, if the will is there. On the insinuation that the North is against restructuring, Hon Jerry Alagbaoso maintained that it's not true as those that understand what it truly means are in support for a restructured Nigeria. He gave instance with Alhaji Atiku Abubakar who is a northern and is at the fore front for the restructuring of Nigeria and wondered where the school of thought that the north is against restructuring came from. He opined that restructuring is enable the federating units to develop at their own pace and capacity as it was before the military take over of Nigeria. He further stated that the call for restructuring is not based on ethnicity, but for the six geo political zones in the country to harness there geographical potentials to suit their needs and yearnings for their people.
He concluded by stressing that if the 2014 confab report is implemented, most of the agitations all over the country for restructuring would have died a natural death, directly or indirectly. 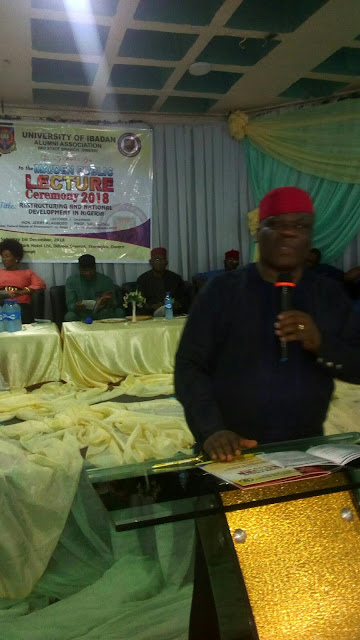