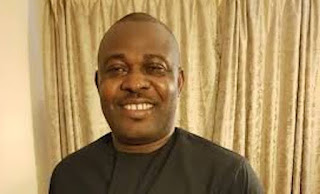 There are birthdays and there are birthdays! A birthday is a commemoration of the day a person of was born into the land of the living. That's birthday! But there's also birthday, which is the celebration of what a person has done and achieved with life thus far. That too is birthday!

The mystery and difference in both classes of birthdays is found in the hypothesis that while everyone is entitled to the former description of birthday and not the latter, some people enjoy both the former and latter.

One very important personality, I know, whose birthday fits in as a birthday of birthdays is Hon. Engr. Gerald Alphonsus Irona, the current Deputy Governor of Imo State. He's 53, Thursday, August 1, 2019, having been born on August 1, 1966.

Ordinarily, it should have been another birthday. But his is different! In addition to the normal birthday etiquette, Hon. Engr. Gerald Irona is being celebrated for his profound achievements over the past three decades and even more. In other words, over half of his very eventful and successful life has been dedicated to the service of humanity in his native land of Oguta, his Imo State, his Nigeria and beyond.

It all began in 1996 when he cut his political teeth as an elected Councillor of Ward A in Ohaji-Egbema Oguta Local Government Area (LGA). He was re-elected in 1997. By 1998 he was elected State Secretary, All Peoples Party (APP). By 1999 he won the election to represent the Oguta State Constituency in the Imo State House Assembly (IMHA). That's legislative capacity.

In 2003, Hon. Engr. Gerald Irona became the Chairman, Transition Committee of Oguta LGA, where in 2004 he made history as the first Executive Chairman of Oguta LGA. He was elected unanimously and unopposed, and served Imo State in that capacity till 2007. That's executive capacity.

He went on in 2011 to win the election to represent the Oguta/Ohaji-Egbema/Oru West Federal Constituency in the House of Representatives; the 7th Assembly. This is legislative capacity.

In 2017 at the National Convention of the Peoples Democratic Party (PDP), Hon. Engr. Irona was elected into the National Executice Council (NEC) as the Deputy National Financial Secretary, where held sway until he was identified and appointed the running mate to the PDP governorship candidate in Imo State, His Excellency, Rt. Hon. Emeka Ihedioha, CON, KSC. That's administrative capacity.

Today, after the successful outing and victory in the 2019 gubernatorial election by the PDP, Hon. Engr. Gerald Alphonsus Irona is the Deputy Governor of Imo State. That's executive capacity.

It is significant that he is continuing his service to Imo State with an excellent experience pedigree and antecedence of executive and legislative competence.

He's an intellectual, technocrat and professional from the engineering family. He severally attended the Institute of Management and Technology (IMT), Enugu; Imo State University (IMSU), Owerri; and Eni University Kestagandof, Italy where he studied engineering.

In politics, as an Honourable Member of IMHA, Hon. Engr. Gerald Irona was Chairman, House Committee on Petroleum, Environment and Energy. As a representative of an oil producing area, he effectively utilized his position to advance the process of harmony between the oil companies and their host communities.

This he did by conceptualizing, initiating and ensuring the crystalization of the first ever Memorandum of Understanding (MoU) between oil companies operating in Imo State and their host communities, particularly the Nigeria Agip Oil Company (NAOC) and Oguta/Eketekwuru communities; Chevron Oil Company and Izombe/Rumuekuneku communities; Addax Petroleum and Izombe/Eziorsu communities etc.

It is also to his credit that as a member of the Presidential Committee on the Verification of Oil Well, he ensured the return of ceded Oil Wells in Egbema and Oguta back to Imo State.

Hon. Irona served Nigeria and Imo State in the 7th Assembly first as representative of the South East geo-political Zone in the Selection Committee and later as Deputy Chairman, House Committee on Gas Resources. He was also a member of other strategic House Committees like Power; NDDC; Petroleum Upstream; Local Content; Sports, Privatization and Commercialization and Housing and Habitat.

Notably, Hon. Irona as a member of the historic House Ad-hoc Committee on the Investigation of the Fuel Subsidy Payment, maintained outstanding integrity and was never found wanting.

As the Deputy National Financial Secretary of the PDP, he displayed the highest sense of responsibility and dedication. Currently, Hon. Irona is the Deputy Governor of Imo State. He is a devout Catholic, happily married and blessed with children.

The foregoing summary profile of Hon. Engr. Gerald Irona combine to accord impetus to my preamble that he's not celebrating just another birthday. Rather, he's celebrating a life characterized by a large cache of achievements at this dawn of his glorious middle age.

There's no doubt that with his established glowing anointing for accomplishments and achievements in public service to God and humanity, Hon. Engr. Gerald Alphonsus Irona will be a very big haymaker in the RebuildImo administration and project that's very set to assume the flight mode.

May God Almighty continue to abide with him as he serves Imo State and Nigeria at this point in time as deputy governor, with great readiness to do even much more in the days, weeks, months and years ahead.

Happy birthday to you, beloved Hon. Engr. Gerald Irona, Deputy Governor of Imo State, for you are a jolly good fellow!

*Nwadike is the Special Assistant on Research to the Governor of Imo State.
Email Post