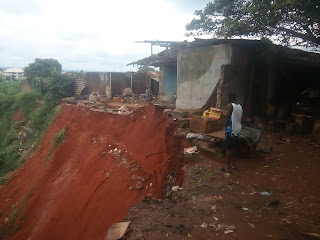 A heartbreaking Erosion has destroyed goods and shops at Mgbuka Market Nnewi affecting over five shop owners, while seriously encroaching into the market,at the old motor spare parts section of Nkwo Nnewi Market.

It is good to point out that this erosion menace have been ravaging the Mgbuka market for over 15 years and have in the past years, pulled down many shops and is gradually creeping into the market.

While narrating his ordeal in the market the Chairman of fairly used motor parts dealers association, Comrade Chinedu Enyiribe to Nigerian Notch, that they came to the market in the morning of 31st of July 2019 only to realize that some shops have carved in to the gully erosion in the market.

He said “Alot of the shop owners have lamented that they lost their shops and are afraid what will happen next as it can be anyone. I am appealing to the Federal and state government to come to our aid. We need urgent assistance”.

Mr. Chinedu and the secretary General, Ude Celestine said they had reached out to the Federal House of Representatives member representing Nnewi North, Nnewi South and Ekwusigo, Hon. Chris Azubuogu, in December 2018, who promised that it will receive attention from the ecological fund of the federal government.

The Chairman however attested to the fact that the Ecological committee from the Federal House of Representatives had visited earlier in 2018 through the efforts of Hon. Azubuogu but nothing has been done yet, and called on the government to give rapt attention to the menace before it comes into the market, which will be life threatening.

One of the shop owners affected by tragedy, Mr. Livinus Ugo said, “I lost goods worth over five hundred thousand there, we are still calculating and removing the remaining goods from the shop. Many of the items were covered in red sand.” He therefore called on the government to help them to stop this erosion so it won’t affect others in the market.

In what seems to be palpable fear to avoid further lose of lives and property shops near the gully erosion where seen deserted. The traders in one voice therefore called on government and relevant authorities to come to their aid to forestall the repeat of such disaster which has been a reoccurrence in the market in recent times.

The shop owners in Mgbuka have called on the Anambra state government to come to their aid to avert further damage.
Email Post