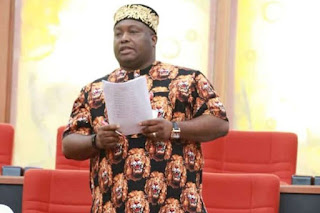 Its no longer news that the Senator, representing Anambra Senatorial District, Senator Dr Patrick Ifeanyi Uba got a landmark judgement at the recently concluded Anambra South Elections Petition Tribunal. The good news however, is that the landmark and well articulated Judgement by the justices of the law, led by Hon. Justice Okara Ebimie Thelma, and assisted by Hon. Justice Sunday Olorundahunsi and Hon. Justice Ngele Gilbert Alo. The tribunal stand further exposed the flaws and lipholes of the petitioners, who lost the election blur and black, and further adjudication can be seen as an after thought, not just in law but to the sensibilities of all well meaning Anambrains and most especially Anambra people from the South.

In an official judgement document of the tribunal made available yesterday to Nigerian Notch Newspapers, we realised that Senator Ifeanyi Uba, not only floored his petitioners, but put the records straight that he won the election, free and fair. Most of the Evidence tendered by the APC and PDP respectively were thrown out for lack of merit. Take for instance, the evidence tendered by APC agents representing Former Senator Andy Uba, for PW2 ,PW3, PW4, PW5, PW6, PW7, PW11, PW12,PW13,PW15 and PW18 who were collation/supervisory agents was punctured by the law, because they were not seen to have been on ground at these aforementioned polling units, as they under cross examination said they were roving agents. In PW8 and PW9, the witness could not sustain their allegations under cross examination, as the referenced voters voucher was not only vague but unsubstantiated as such could not be linked to Senator Dr Patrick Ifeanyi Uba.

It was however gathered that the petitioners instead of focusing on evidence on the said excess votes, in relation to registered votes, they continued to chase the wind, with unsubstantiated claims. Rather in summary, it was gathered by the tribunal that all ward collation/Supervisory agents that testified in the petition did not give direct evidence of what actually transpired at the polling units, rather they relied on information or reports submitted to them by polling agents, which were not also tendered in evidence.

The tribunal in driving home its point, relied on the case of OKE Vs MIMIKO 2 in rejecting the testimonies of the ward collation/Supervisory assertions, whom the tribunal said were not supermen to have been at the several polling units at the same time, as ward collation/supervisory agents can only give evidence of what happened at the collation centre where they are, and not a polling unit they did not visit.


The tribunal judgement further highlighted on the trite, which ridiculed the petitioners position, where there agents voluntarily signed on the election results that declared Senator Ifeanyi Uba winner, which in effect means that by signing an acceptance of the said results, they agreed that it was a free, fair and credible. The judgement cited supreme court judgement of GUNDIRI Vs NYAKO(2014) where the supreme court held that " where a polling agent signs the results sheet of an election voluntarily on the instruction of his political party that authenticates the validity of the results " This goes to show that all were in support of the fact that elections was held on 23/02/2019 was free, fair and peaceful in Anambra South Senatorial District.

On the issue, of the declaration of Senator Dr Patrick Ifeanyi Uba as winner of the election, the tribunal ruled that " we agree with counsel for the 1st Respondent's submission that evidence of PW8 and PW9, none of whom was a polling unit agent at the election, has not established the allegation of bribery and vote buying through the alleged use of voter reward voucher at the election which allegation transversed the over 1000 polling units in the said senatorial district. The evidence of PW8 and PW9 were summarised above and they form part of the record of this tribunal "

The landmark judgement further stated that "We had gone through the records in the petition and there is no valid evidence that the election was declared inconclusive by the same  2nd respondent who signed EXH.1P-EC8E(I) 01. And EXH.1 R-EC8E(I) 01 being the declaration of result sheet for the senator district, which showed that the election was conducted and the 1st respondent declared as winner thereof. Therefore section 27 of the electoral act, 2010( as amended) was duly complied with by the 2nd -4th respondents in the declaration of the 1st respondent as the winner of the election.

The tribunal judgement further exposed the weak evidence tendered by the petitioners who laboured so much to link Senator Dr Patrick Ifeanyi Uba or someone authorized by him with the electoral offences complained of in the petition. The judgement stated however that " In an attempt to unravel the allegation of electoral misconduct by the first respondent at Nnewi North Local Government Headquarters, we had recourse to EXH 1P-EC8E(I) 01 which is the result collated at the said senatorial collation centre as the final result to find out whether there were mutilation, alteration or cancellation. We observed that the said exhibit was without blemish, no alterations, cancellations and no mutilations. The said exhibit was signed by one Prof. Meshack. N. Umenweke, the 2nd respondent and the senatorial returning officer. Also upon thorough examination of EXH.1P-EC8D(I) 01, which gave rise to EXH. 1 P-EC8E(I) 01. The result of the seven local government areas that made up the senatorial zone, there were also no cancellations, mutilations or alterations. All documents were tendered by the petitioner"

The petitioners it was realized did not prove the case of alleged assault by Senator Ifeanyi Uba on the two police officers, namely CSap Nurudeem Yusfuf and SP. Pemi Ogokimi, as none of these people were called as witness to corroborate the alleged assault and forced declaration.

It is however in this note that the Judgement of the tribunal of Anambra South Senatorial district threw out the petitions by former senator Andy Uba and Chief Chris Uba, who in their submission by their counsels did not prove there cases that the election of Senator Ifeanyi Uba was not free and fair, thus concluded by " On the whole, we hold that the petitioner has not by credible evidence prove his case and failed to show that he is entitled to his reliefs. Consequently the petition is hereby dismissed. The return of the 1st respondent, Ifeanyi Uba is hereby upheld. No order as to cost"
Email Post