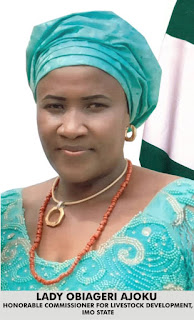 Making a swipe of new ideas and innovations has become both trendy and fashionable in our contemporary society. Our people, generally it seems, do not have the patience of giving government policies hitherto unknown to them the benefits of doubt. Understandably therefore, when the Executive Governor of Imo State Distinguished Senator Hope Uzodimma created the Ministry of Livestock Development, a good number of the state population misconstrued the idea.

The avalanche of criticisms nonetheless, the governor, as a deep thinker with a penchant to read the future with flawless accuracy, also as an astute  administrator whose only  interest is to liberate the state from the stranglehold of crude oil and federal allocation as its only source of income, had gone ahead, as a follow up, to appoint a quintessential homegrown farmer for the novel Ministry. The new Commissioner,  mandated with the  onerous task of rediscovering, reviving and rehabilitating  the ailing livestock sector of Imo State, is Lady Obiageri Ajoku. And she swung into action, immediately, with some critical member staff of the Ministry.

It is pertinent to note that prior to Senator Uzodimma's emergence as Governor Imo State, every agro business (Livestock sector inclusive ) belonging to the government was in, put succinctly and mildly, comatose. It is a sickening concern that numerous agricultural ventures established by late Dee Sam Mbakwe administration were left to undergo their cycle of natural deaths, and attendant  decay. With the herculean task of reviving the sector, and moreso, setting it on the paths of optimal use, Lady Ajoku, undeterred, mapped out a workable  blueprint. As a farmer, teacher and renowned administrator, the Honourable Commissioner and her staff drew a four point agenda as guide.

1. Identification of locations and exact state of Livestock Sector in the state.

2. Identification of mitigating factors,  and on the flip side, prospects therein.

3. Pragmatic but systematic implementation of observations, and

4. Controlling the sector to enable it yield optimally in other to avoid relapse.

The bane of societal growth, in Africa especially, is not in the formation of workable blueprint, but in the lethargy, or total refusal of government handlers to follow set goals, even theirs, whatever the reason. Rewriting sad commentaries however, the Honourable Commissioner, working with the speed of light, set up a crack team to visit all public livestock sectors in the state. On the cites, It became obvious, without persuasion, what governor Hope Uzodimma saw so that a Ministry was devoted to it.

Expressing optimism however, the team discovered that at Avutu Modern Poultry, Obowo in Obowo LGA, the farm if translated to proper use, would provide employment opportunities to the teeming youths of the state. It would also boost protein consumption of Imo people first, and what is more, export to nearby states.

At Achara Ugbo Farm Settlement in Owerri North LGA of Imo State, the team discovered, worrisomely, that the clusters which provides for sheep rearing, goats,  poultry, apiculture, to mention but a few, has been out of use for several years. Nonethelees, if adequately put to use, the cluster would create  gainful employment opportunities for our youths. It would also lower the high price of proteinous foods in the state. At Oguta Fisheries in Oguta LGA, the Honourable Commissioner and her team discovered, painfully, that a facility of immense magnitude built by the famous late Mbakwe administration, has been out of use. However, the team noted that if put into use, Oguta Fisheries would employ our youths in myriads, while churning out tons of fishes periodically, all healthy and tasty.

The team who proceeded to Imo State Abbattoir along Egbu Road Owerri, discovered, to the members chagrin, that an abbattoir built under good hygienic specifications especially the slaughter slabs are running out of its original plans. Facilities essential  for a modern abbattoir are no longer functional. It is instructive to note that the Livestock Ministry is saddled with the responsibility of ensuring that operations in our abbattoirs take place under decent conditions, including and not limited to hygiene. The Ministry reassures of its unwavering commitment over this, with no modicum of compromise, or  the lowering of standards.

In the light of present global economic realities,  particularly the near zero drop in prices of crude oil, what the state, indeed the nation needs, is the diversification of its  economy to help in  internal revenue generation. Livestock Ministry, regarding this, is handy and the surest way to improve on the states revenue generation. As a new Ministry headed by a proactive Commissioner, the Ministry is working out modalities with the private livestock practitioners in the state on possible ways to reduce the cost of livestocks, inputs and outputs to lower the cost of finished products from livestocks in the state. The Ministry is developing a master plan to enable her acquire land and establish a Livestock Market in the state where all Livestock products from poultry, fisheries, snail rearing, animal husbandry, etc are to be sold.

As Distinguished Senator Hope Uzodinma marks a 100 days in office, the necessary things needed for Ministry of Livestock Development to kick start its activities has been put in place, and as a food productive Ministry, the effects of the Ministry shall be felt by the good people of the state in the next six months. Untill then, Governor Uzodimma, the global tide in oil market has shown, deserves accolades for possessing an eagle eye which informed the creation of Livestock Ministry as a veritable alternative to the rapidly dwindling crude oil dependent economy. The Ministry, admittedly, cannot achieve its noble feats and goals  without the help and corporation of critical stakeholders, especially the people in whose areas the agro producing clusters are domiciled. The Ministry therefore  appeals for synergy, corporation and team play as it rolls the ball of its activity, with shared prosperity in view.