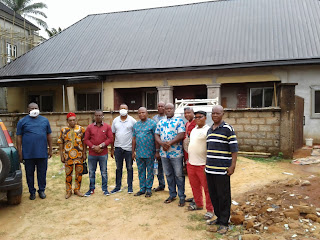 Rotary Club 9142, led by Rtn: George Okonkwo has inspected the progress of work at Ndiakwu Otolo Health Center. He came in company of Rtn Dr Nonoso Epundu, and others, to ascertain the level of work so far recorded at the health center, based on their envisioned partnership with the community, to ensure rural health care delivery.

Rtn George Okonkwo, said, they are hopeful, they will complete the work at the health center in 2 weeks time. He said the project is part of his community health development partnership, which rotary club is bringing to the community, so as to ensure rural health care delivery.

Continuing, he said that when the health center is completed, that doctors will be resident at the health center to give care to the people, at  affordable rates, which is one basic thing, rotary wants to fulfil, primary health care centers giving care when needed. He stressed that they are not stopping at Ndiakwu Otolo health center, as there are plans to do more in other places.

Rtn Dr Nonso Ebpundu, past president of Rotary Club 9142, in his submission further stated, that the reason for the partnership is to form a synergy with the community, to achieve rural health care delivery, which is the primary goal of the project through the state government.

He went on to state that the Anambra state primary health development agency is still involved, because the health center is directly under them, and they are aware of this project. Dr Epundu said that there is room for integrating Federal Government assistance from Abuja, in terms of healthcare delivery to the people as well, as it will bring about  synergy between the state government and  rotary.

In his reaction the National President of Ndiakwa Otolo Community in Nnewi, Hon. Jude Osumouh said the community is happy about the project and its progress. He thanked Rotary Club 9142 for coming to their aid and was happy that the project is almost done.
He stressed that they have always had a program for the health center, but thanked Rotary for coming to add another dimension to it, which is attracting the state government to take active participation at the center.

He however said that the community will invite Rotary Club for the official opening of the health center, during the opening of the town hall, later in the year.

In his submission, the assistant secretary of Ndiakwu Otolo community, Hon. Amaibi Adikwuru thanked rotary for their kind gesture, and asked them to replicate this gesture to other communities in Nnewi and beyond.

Surveyor Ulasi an indigene of Ndiakwu Otolo community in his reaction, thanked God for the ability of the rotary president, and the vision he has given him to think about such project.
He prayed that God will give them the strength to complete the project in record time, so that health care activities will start at the center.
Email Post