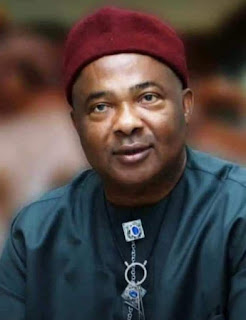 From the look of things, a genuine assessment of the performance of Governor Hope Uzodimma in his 100 Days in Office would be like assessing the performance of a governor during wartime. While no part of Nigeria is at war as we know it, the whole country is fighting the coronavirus war. This pandemic, the first of its kind in contemporary history, is a war of sort. The entire world is fighting an invisible enemy, shooting without bullets and missiles. With the world economy down to its knees, schools and worship centers closed, businesses and offices closed, everyone ordered to stay at home, and hunger and uncertainty ravaging, there can never be a bigger war. With the price of oil, which is the mainstay of many economies, at all-time low, many consider the coronavirus war as more vicious.

To properly conduct a fair assessment of the Governor, therefore, we must put in perspective how he is prosecuting the covid-19 war in the state. The Governor had on several occasions shown that he understands the seriousness of the war. He had during one of his statewide broadcasts painted a picture of the severity of the covid-19 war when he said that life is the principal thing, ndu bu isi. By this he means that winning the covid-19 battle and saving the life of the people is the target, the most important. We think this is a good strategy, a good mindset. The Governor has also shown that he understands what needs to be done to win the war. In fact, he had said that he would do all it takes to win the war against coronavirus. So far, we think the Governor is doing so. With no confirmed case of coronavirus in the state, the Governor seems to be doing the right things, or winning the war.

The preoccupation of a government in wartime is to win the war. Warfare can be very distracting. At family levels, when conflict erupts, members of the family encounter several challenges, and until the conflict is resolved the family may not move on. That is why many people preach that where there is peace, there is growth.

During the civil war in the country, between 1967 and 1970, people did not care so much about infrastructures, but more about their survival and early end to the war. The British Prime Minister during the Nazi onslaught in the Second World War, Prime Minister Winston Churchill, encouraged his people to keep the faith: “We shall not fail or falter; we shall not weaken or tire. Neither the sudden shock of battle, nor the long-drawn trials of vigilance and exertion will wear us down. Give us the tools, and we will finish the job.” When, therefore, in a warlike situation Governor Hope Uzodimma conquers the distractions of such situation and touches hard on providing needed infrastructures, we need to give him a thumbs-up.

For some days now I have been plying the Owerri/Onitsha Road and other parts of Owerri in the course of my job. I have seen that the very troublesome spot at First Bus-Stop Irette, along Onitsha Road, that forced people to abandon one lane of the road and use only one, causing gridlock, is being fixed. For over eight years that portion of the road gave road users nightmare. Today, you cannot drive through that spot without appreciating the quality of work that is going on there. I have also seen that serious work is ongoing from the Amakohia Flyover to Onitsha Road. Imo people know that this project was initiated by the Ikedi Ohakim administration but Rt. Hon. Emeka Ihedioha re-awarded the contract after eight years of its abandonment. Today, Governor Hope Uzodimma is going on with the project. While the initiator of the project deserves some commendation, the concern of the people is to get the road fixed for use. This is why Imo people give standing ovation to the Governor.

It is commonly said that honour should be given to whom it is due. This saying should be lived. Across the state road projects are going on. The Umuguma Link Road through the Federal Secretariat and ending at Ebere Links on Port Harcourt Road is ongoing. This road project, also initiated by the Ohakim administration, is contained in the state’s masterplan but it was abandoned by the government that succeeded it, probably because it was initiated by someone they considered a political rival. But Governor Uzodimma took up the project, and it is ongoing. The Control Post/Port Harcourt Road project is ongoing. The Nekede/Ihiagwa Road project is ongoing. The Relief Market Road project is wonderfully ongoing, with 15cm stone-base, drainage and walkways. Dick Tiger Road, Control Post/World Bank/Umuguma Road, Akabo/Ekemele/Okigwe Road that had been a nightmare for a decade, Wetheral/Akachi/Aba Road, Owerri/Mbaise/Seven-and-Half Road and Imo Airport Road are ongoing.

We have seen what the Governor is doing in terms of security. With the procurement of operational vehicles and other essential gadgets and the launch of Operation Search and Flush under the Imo Initiative, the Governor is placing his hands firmly on the levers. Thanks to this security effort, Imo State is calm, and no longer a hotbed. Imo people now sleep with two eyes closed. The Governor has shown uncommon disposition to peace. He is not fighting his opponents. Rather some people are taking the political war to his door step, making some uncanny comments. But he has since ignored them, preferring to maintain the peace in the state. Governor Uzodimma is chasing no one about for any reason and not one person has been manhandled. This intangible achievement is commendable, because in an atmosphere of crisis nothing much can be done.

We have also seen appreciable efforts at revamping moribund industries in the state. With clear-cut programmes to make the long-abandoned Onitsha Road Industrial Layout live up to expectations, the Governor has demonstrated that governance is not a singsong. He is revamping the long-abandoned Adapalm. Today, Adapalm is producing palm oil after several decades. The Governor plans to set up four smaller industries around that facility so that it would produce optimal results. This will not only create jobs, it will help fight insecurity and stabilize the state economy. The Governor has refused to take the easy way out on Adapalm. He is confronting the monster and producing results.

With his futuristic agenda termed STEM and ISEOP, the Governor’s plan for the education sector is enticing. He said: “In education, the focus would be on Science, Technology, Engineering and Mathematics (STEM) to ensure Imo produces the next generation of cerebral graduates who will run the world in ICT, Artificial Intelligence and Robotics, hence the overall focus would be on practical education over mere certification. Skill acquisition centers alongside Zonal Technology Incubation Academy (ZOTIA) will be established in the three senatorial zones to teach skills such as machine learning, Coding and Programming, Artificial Intelligence, and every other skill needed for Imo to compete in the 21st century economy driven by innovation. Exceptionally brilliant students would be eligible for financial support under the Imo State Education Opportunity Programme (ISEOP)”.

Warlike situations disrupt businesses and government activities. It also forces hardship on the people because of the severe disruption of economic activities. This is the reason people come together during wartime to help their government see the early end of the war. They also help the government to minimize the impacts of the situation on the people. If the war ends and all the people are gone with it, there would be no government, no business.

We will be in a better position to appreciate the pains the Governor has been through if we take off the veil of politics and appreciate that the Governor is not in a time that is normal. Our understanding of the circumstances the Governor is facing will determine the height of empathy we will show him. Our understanding will also put before us the need to rally round the Governor, because, as we say it, *_igwe bu ike_*. The Governor’s failure would be our collective failure. His success would be our collective success. We have nothing to gain as a people from his failure.
Email Post