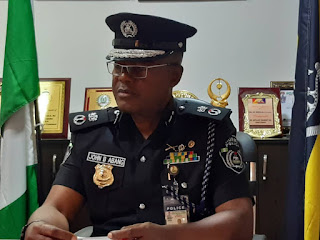 The commissioner of police, Anambra state police command, CP John Abang will commence directives of the federal government on keeping of curfew in Anambra state, from Monday 4th May 2020. He made this disclosure in a press release made available to newsmen in Awka, the Anambra state capital, by the PPRO SP Haruna Mohammed.


In the press release, the Commissioner of Police stated that "The Anambra State Police Command wishes to inform the Public that following the directive of the Federal Government on Commencement of  Nationwide Curfew between 8:pm to 6:am with effect from Monday 4th May 2020,the Command and other Security Agencies will enforce to the letter the presidential directive in the State.

In view of the foregoing,the Command seeks the Cooperation of "Ndi Anambra" and residents alike to adhere strictly with the Federal Government directive. The Commissioner of Police *CP John B.Abang,fdc, equally warned Officers and Men of the Command to be civil to members of the public and also exercise restraint by avoiding use of extreme measures while enforcing the order.

The Commissioner of Police went on to  reassure the good people of Anambra State, that the Command under his watch  will remain steadfast and committed in the duty of ensuring public safety and security in the state.