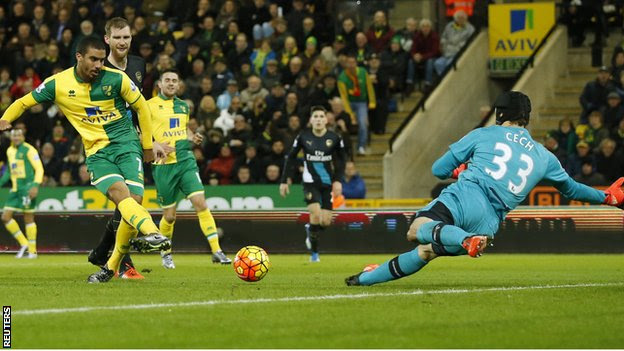 29 November 2015Last updated at18:58 GMT
1.4K
By James GheerbrantBBC Sport
Arsenal missed the chance to draw level on points with Manchester City at the top of the table after Lewis Grabban's equaliser earned a point for Norwich.
The Gunners were gifted the lead when John Ruddy's poor clearance allowed Alexis Sanchez to set up Mesut Ozil.
But the visitors were pegged back by Grabban, who received Robbie Brady's defence-splitting pass and held off the challenge of Gabriel to fire in.
Injuries to Laurent Koscielny and Alexis Sanchez deepened Arsenal's woes.
Play media
Jump media player
Media player help
Out of media player. Press enter to return or tab to continue.
We were a bit jaded, says Arsenal boss Arsene Wenger
Centre-back Koscielny was forced off in the first half with a hip injury, while forward Sanchez hobbled off after the interval with an apparent hamstring problem.
The Gunners are now two points off the lead in fourth and manager Arsene Wenger may come under renewed pressure to bolster his squad in January to sustain their title challenge.
Norwich, meanwhile, remain 16th but will be buoyed by a display full of heart and determination.

An evening that could ultimately prove damaging to their title aspirations started well for Arsenal as Ruddy's error gave them a deserved lead.
Before the match, the England goalkeeper had addressed criticism of some recent indifferent performances, saying: "I don't think I have been as good [this season] as I have been previously, but form is temporary."
But his hopes of earning Norwich just a second clean sheet in 14 matches were dashed as he scuffed a clearance to Gary O'Neil.
Sanchez nipped in to dispossess the Norwich captain and threaded a through-ball to Ozil, who clipped a deft first-time finish over the goalkeeper. Ozil completed 67 of 68 passes, despite making many of them in advanced positions
The Germany midfielder has now had a hand in 13 goals in his last 12 league games, with 11 assists and two efforts of his own.
But his well-taken goal was just one facet of a hugely impressive performance, in which he misplaced only one of his 68 passes despite making 57 of them in the Norwich half.
And the 27-year-old could be an increasingly important figure in the coming weeks following the injuries to Koscielny and Sanchez.
The Chilean's loss would be particularly keenly felt as he is Arsenal's joint top-scorer in all competitions this season, with nine goals.
Arsenal face a must-win Champions League encounter against Olympiakos on 9 December and Wenger will be counting on Ozil to shoulder extra responsibility in midfield if Sanchez is ruled out.
Defensive midfielder Francis Coquelin is expected to be out for three months after suffering ligament damage, while Jack Wilshere, Tomas Rosicky, Mikel Arteta, Theo Walcott and Danny Welbeck are also sidelined.

November is statistically Arsenal's worst month under Wenger - they average just 1.6 points a game - and once again their title chase has stuttered in the penultimate month of the year.
The Gunners have taken only two points from three matches, having previously drawn with Tottenham and lost at West Brom.
But, in truth, they were perhaps fortunate to leave Carrow Road with even a point as Alex Neil's side created the clearer chances following the goals.
Wes Hoolahan fired over at the back post from a superb whipped cross from Andre Wisdom, and Jonny Howson volleyed over from a corner after Petr Cech brilliantly kept out Gabriel's inadvertent back-header.

Man of the match - Mesut Ozil

The German midfielder had five shots and completed 98.5% of his passes

Norwich manager Alex Neil: "We conceded the first goal and at that point I thought we had pressed the self-destruct button, but we showed great character to get back into the game.
Play media
Jump media player
Media player help
Out of media player. Press enter to return or tab to continue.
Norwich showed great character - Neil
"In the second half we started a bit slow and invited Arsenal onto us, but as the half wore on I thought we were the better team.
"Getting the balance right for us was important. At the start of the season we played well but weren't solid enough. Then we became more solid but didn't have enough quality going forward. I thought we got a better balance today."
Arsenal manager Arsene Wenger: "In the second-half Norwich had good chances and we were playing against a team that is physically clever, they defender deep to catch us on the counter attack and we were a bit jaded, not as sharp as usual.
"The quality of the performance was below what we can do offensively."

The stats you need to know