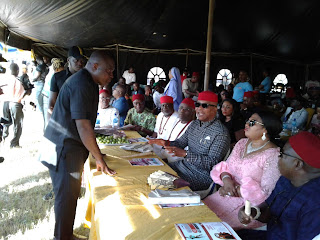 Azia Community in Ihiala Local Government Area of Anmabra state, last week celebrated its 2018 New Yam Festival (Iriji Azia). The event which was a long week event, climaxed with the commissioning of Azia Civic Center, by the governor of Anambra state, Chief Willie Obiano, built by Azia Town Union under the leadership of its President General, Ichie Kenneth Maduakor.
In his welcome address, the President General of Azia Town Union, Ichie Kenneth Maduakor, thanked the governor of Anambra State, who was ably represented by the Deputy Governor, Prof Nkem Okeke, for finding time to be with the people of Azia, in this year Iriji festival. He said it is a thing of joy, that the Civic Center, which has lingered over the years, was completed this year.
He commended the efforts of Azia Indigenes, who made it possible for the dream of completing their civic center to become a reality. He went further to thank, Bar Allen Onyema (Chairman Airpeace) who he said was instrumental to the building of the hall, because of his financial contributions over the years, which helped in no small measure.
While speaking with newsmen after the event Ichie Kenneth Maduakor, said “It’s a thing of joy that we were able to complete the project of Azia Civic Center, which will go a long way to help unite the people of my town”
He thanked friends of Azia, in the persons of Bar Allen Onyema(Chairman Airpeace), Speaker Anambra State House of Assembly, and others who came from far and near to witness the 2018 Iriji Festival, and prayed that God will be with them in all their endevours.
In the same development, Chief Felix Muo ( Agunaechemba Azia), commended Azia indigenes for coming out in their numbers to witness Azia 2018 New Yam Festival, which shows that they are united. He was visibly happy for the development, which has come to Azia, with the completion of the Azia Civic Center.  He said that Azia is a town which is blessed with both human and natural resources. He thanked Azia Town Union, led by Ichie Kenneth Maduakor for his forthright leadership in seeing that the Town hall was completed and on time. He called on Azia people to unite, to move the town forward, as there is no place like home.
Highlights of the event was the cutting of cake, by the Deputy Governor, with other dignitaries, and a live show performance by the music maestro Pyhno. 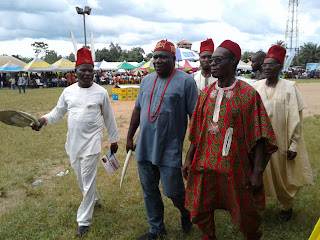