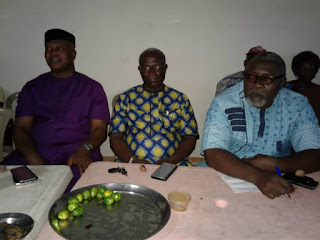 Hon Azuka Okwuosa a front line APC Aspirant contesting for Senate, under Anambra South Senatorial zone, today held a town hall meeting with the people of APC Nnewi North in a bid to intimate them, about his mission and vision to represent the senatorial zone if given the mandate by APC.
Hon Azuka Okwuosa in his opening remarks said, it is high time, the people of Anambra South Senatorial Zone took the bull by horn, in charting a new course for the development of the people and the zone in general.
He lamented that the incumbent,who he said has been in government, for nearly 16 years has not done much to alleviate the sufferings of his people, while in the executive for 8 years with Chief Olusegun Obasanjo, and as a legislature at the red chambers for nearly eight years.
He stressed that if given the mandate by APC, he will right the wrongs the zone has experienced in the past, through apt and proper legislation that will bring development nearer to the people. He said he will push for the completion of the road that cuts across Anambra, Imo, Abia and Cross River, leading into Cameron which will ensure that there is trade and commerce in the area. His 21 agenda to develop the zone cuts across the core areas of life, which he said he will unfold when given the mandate, but highlighted that he will concentrate on road and security to open the space for major developments  that will mark his eventful era as senator, if given the mandate by the people of Anambra South Senatorial Zone.
He however enjoined party faithful in Nnewi North LGA to choose wisely the person whom they deem fit to represent them.
He said the forth coming primaries on the 2nd of October 2018 will decide who becomes the party's flag bearer and therefore asked them to put sentiments aside while voting for the candidate of their choice.
Email Post