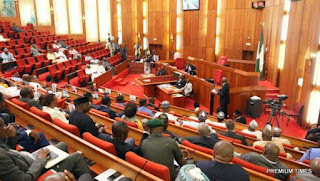 AHEAD of the inauguration of the 9th Senate, Chairman, Senate Committee on Media and Public Affairs, Senator Aliyu  Abdullahi (APC, Niger North), has allayed fears of Nigerians on possible leadership crisis in the 9th Senate as it was in the 8th. Speaking with journalists shortly after collecting his Certificate of Return from Independent National Electoral Commission, INEC,  as senator-elect, yesterday, Abdullahi said the required lessons to be learned from the leadership squabbles of the 8th Senate had been learned, and would not repeat itself. “I was a key player in the leadership configuration of the 8th Senate and the attendant crises that followed, as one of the 43 returnees now, the lessons learned will be used to prevent the mistakes of the past from happening,’’ he said.

Senate Meanwhile, strong indications emerged, yesterday, that the fight for who becomes the presiding officers has taken a new dimension. This time, former governor of Kano State, Senator Kabiru Gaya (APC, Kano South), has declared his intention to vie for the position of Deputy Senate President. Senator Gaya, who declared his intention yesterday at the International Conference Centre, ICC, after collecting his Certificate of Return as senator-elect from Kano South into the 9th Senate, told journalists that his aspiration was driven by mass appeal for the position from his colleagues and his burning desire to serve in the leadership of the next Senate, having returned for the fourth time. Gaya said:  “I thank the Almighty Allah who granted me the grace of being elected into the Senate for the fourth time. ‘’As regards the leadership composition of the 9th Senate, majority of my colleagues are mounting pressure on me to run for the position of Deputy Senate President which I want to use this opportunity to announce, being one the most ranking senators in the 9th Senate.” Gaya, who noted that his ambition for the position will be determined by the permission  of the Presidency and the party, said had Senator Bukola Saraki remained in APC and won, he would have still retained his position as Senate President.

Before Gaya’s open declaration for Deputy Senate President position, the focus had been on Senators Ahmed Lawan ( APC Yobe North), Ali Ndume ( APC Borno South) and Danjuma Goje ( APC Gombe Central) for the position of Senate President . But the leadership positions for the 9th senate are still open as far as many of the APC senators-elect are concerned. In separate interviews granted at the ceremony, many of the senators said the Presidency and leadership of the party will give direction to that effect . Specifically, Senator-elect, Adedayo Adeyeye ( APC Ekiti South), said for the 9th Senate to avoid the leadership crisis that engulfed the 8th, the national leadership of the party must provide the required direction to that effect .

However Senator – elect Bamidele Opeyemi ( APC Ekiti Central ) in his own suggestion for seamless leadership configuration in the 9th Senate, said whatever process that will be used by the Presidency and party leadership must be well managed to avoid any backlash. He said:  “The calibre and character of personalities elected for the 9th Senate are very solid and promising for the country but leadership is key , the very reason the leadership of the ruling party must manage well  whatever process will be used for emergence of leadership at both chambers of the National Assembly. “ Once this is done, the party and in particular, the National Assembly and the Presidency, will be on the same page on development-driven bills sponsorship, policy formulations and approvals.”
Email Post