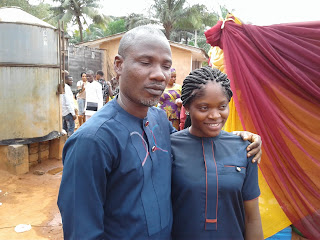 The incoming house member, Anambra State house of assembly for Nnewi North state constituency Hon. Nonso Okafor, has in a grand style thanked all and sundry who participated actively towards his success at the polls.
It started with church services at three different churches ie ....... Anglican Church, Living Faith Church, and St Peter's Catholic Church, Odida Nnewichi, where he once more thanked all that made it possible for his emergence as the person to represent them. He promised to implement to the letter all his campaign promises to the people which is the real reason he was elected.
He reiterated the fact that the masses contributed 100% to his electoral victory and promised not to fail them.
He however thanked all that came around to celebrate with him, saying that he is happy that God gave him the victory, which is s not just for him but for every person that stay in Nnewi.
While speaking to newsmen he went further to reaffirmed his earlier stand of making the people proud, because of his clear cut program he has for his constituency which propelled him to come out for the race.
He therefore called on the people to give him the needed support to serve them well.
Email Post