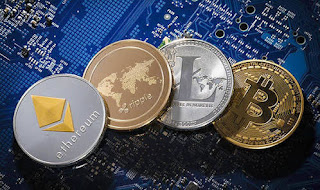 A cryptocurrency firm, Paxful Incorporated, has been accused of defrauding thousands of Nigerians of millions of dollars earned from online trade in digital currencies.

The Estonia-based company allegedly suspended the accounts of its Nigerian subscribers, thereby denying them access to millions of dollars in their online wallets.

A Non-Governmental Organisation, United Global Resolve for Peace, which made the allegations in a petition to the Economic and Financial Crimes Commission, explained that many accounts had been deactivated and the monies therein trapped.

The petition, signed by UGRP Executive Director, Shalom Olaseni, dated April 2, 2019, said  the illegal action was taken despite the fact that the accounts were not involved in any fraudulent acts.

It said, “A few days ago, our organisation was approached by some Nigerians who complained bitterly that Paxful Incorporated, the company that owns the online cryptocurrency trading and exchange platform, ‘https://paxful.com’ has been ripping them of their life investment in cryptocurrency by suspending their accounts, deactivating their wallets and refusing to return the value in their accounts to them even after investigation and finding that they were not involved in any fraudulent activities.”

The petition disclosed that the digital currency trading firm generated over $20 million profit in 2018, adding that its Nigerian customers provided 40 per cent of the revenue from trade in Bitcoin, Ethereum, Litecoin and others.

It added, “The respondent has, through willful disregard for contract and rules of commercial transaction, done a lot to rob Nigerians of their hard-earned money by its unrestrained activities of blocking their accounts and stating that investigation will be conducted.

“At the end of the investigation, the respondent always comes out to say the vendor has done nothing wrong and thereafter release their accounts without the funds in it.”

A victim, Samuel Olanrewaju, told our correspondent on Friday that the platform had suspended his wallet which had three BTCs worth about $60,000 since November, 2018, adding that the firm refused to respond to his queries over the development.

According to the cryptocurrency trader, the company accused him of creating a false profile online, a charge he denied.

Olanrewaju said, “We have about three million Nigerians trading on Paxful platform and they accounted for 40 per cent of its revenue. Despite this, the leadership of the firm was always referring to Nigerians as scammers. I once challenged the Managing Director, Ray Youssef, for referring to us as scammers on an online forum.

“Paxful allowed all kinds of illegal trading because it was making profit from them. They even allowed Nigerians and other nationals to sell iTunes and Walmart cards in spite of the fact that these cards cannot be exchanged in Nigeria.”

Olanrewaju further explained that thousands of accounts belonging to Nigerians had been suspended or deactivated by the digital currency platform over false allegations, adding that many traders had lost their earnings to the company’s sharp practices.

The firm, however, denied alleged arbitrary shutdown of accounts and wallets, stating that only errant ones were deactivated.

“All accounts that have been shut down have a reason for it. We will not shut down any account unless they violate our TOS (Terms of Service),”  an emailed statement from the company said.

When contacted, the acting EFCC spokesman, Tony Orilade said, “Based on the acknowledgement stamp on the petition, I can confirm that we have received it and we would investigate the allegations.”
Credits: Punch
Email Post