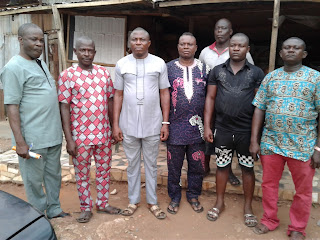 The umbrella body for drivers that ply the Nnewi/Onitsha road axis have been inaugurated.

He commended driver's of the association for the way and manner they conducted themselves throughout the inauguration process.

He however promised to carry everyone along, which was his major campaign promise.

He also thanked in a very special way the President General of Anambra Commuter's Association, Chief Emma Ukatu, and Patron of their association Nze Aloysius Ewurum for the positive role they played towards the success of the election of the association.

He therefore called on the government of Anambra state to come to their aid, by reducing the excessive tax and levies, they pay so that drivers can have a new lease of life.

He went further to state that he will continue ensuring that the welfare of drivers received uttermost concern by the state government.

In the same vein, the secretary of the association Mr Emeka Muoghalu Thanked members for coming out in their numbers to grace the occasion of their inauguration.

He called on the members to support the new administration to achieve the set out goals, which will make them happy.

In his reaction, the patron of the association, Nze Aloysius Ewurum(Akunaesiobike Na Ihiala) thanked God for a successful election and inauguration,and called on members of the association to give Maximum support to Christian Nwogwu And his executive to achieve their set out goals,which is to make drivers happy.

He promised that the executive of Christian Nwogwu, Which he is part of will never let them down. He called on the drivers to support every move by the executive to better the lives of drivers in the association.
Email Post