JUNE 12 ANNIVERSARY: Why we need electoral reforms before 2023 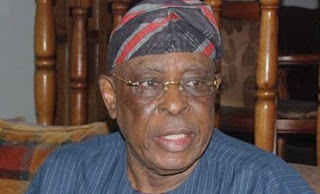 A former governor of Ogun State, Aremo Olusegun Osoba, fielded questions from reporters in Lagos on the 26th anniversary of the June 12, 1993 presidential election, the recognition of June 12 as ‘Democracy Day’ and the imperative of electoral reforms.

*What is the significance of June 12 as Democracy Day and public holiday?*

The significance of June 12 is that the June 12, 1993 election created the current political dispensation we now enjoy. It was the sacrifice made by Basorun MKO Abiola, who refused to compromise and surrender the mandate given to him by the entire country. It is also a celebration of some of our heroes and heroines who lost their lives in the struggle for the creation of sustainable democratic norms in Nigeria. I say this because NADECO that is the father and mother of this democracy was founded, not just to claim the mandate of MKO Abiola, but the original philosophy of NADECO was to fight for respect for democracy in Nigeria. The second reason for NADECO was to sack the military from the politics of Nigeria. These two fundamental objectives of NADECO had been achieved since 1999. MKO Abiola himself was not part of NADECO. Forty nine of us formed NADECO in the residence of the late Major General Adeyinka Adebayo. Abiola came back from the inauguration of Nelson Mandela as president of South Africa to come and join us and he made a pledge when he joined that he will stick to the philosophy of NADECO. He died. He paid the supreme price.   That is one of the major reasons that June 12 is of great importance to this country. Is there any comparison between the June 12 election and other general elections? Has any lesson been learnt? There is no comparison whatsoever. The best election so far in this country was the June 12, 1993 election. It is my hope that the Ninth National Assembly will revisit the issue and look at the Electoral Act.

*What is wrong with the current Electoral Act?*

If there is no reform of the current Electoral Act, and there is no major reform of our electoral system, 2023 will be worse and it is dangerous for the country. Why? First of all, the modern electoral system is digital. Nigeria cannot continue to be analogue when Kenya, Ghana and some countries have gone digital. Nigerian banking system is one of the most efficient in the world. The ATM is working efficiently in Nigeria. The alert on phone is working efficiently. If Nigerian banks can operate digital system, I don’t see why our election should not be digital. The important thing is that, until we go digital, all these manipulations may continue. If these continue till 2023, it will be the beginning of terrible disruption for Nigeria. I am so passionate about electoral reforms. You have turned everything into the highest bidder now. I am shocked that ordinary Nigerians are openly selling their votes. I am a politician. We should do all those reforms where power is removed from the presiding officers, and the electronic system takes over. Take for example, before now, the reform of the bank was hectic. Now, my drivers goes to the filing station to buy fuel with credit card. The transaction is immediately transferred to my telephone. There is reduction in fraud in banks. The electronic system will virtually wipe out selling of votes by voters.

*The president is celebrating June 12. But, he has not signed the Electoral Act. Is there not a mix up there?*

President Buhari is just beginning his second term. Wait and see. First of all, the Eighth National Assembly did something on the Electoral Act. The Ninth National Assembly should continue from there. There must be accreditation through the electronic system. There should transmission of the accredited voters electronically, transmission of all results from the polling booths direct to the portal of INEC. I am saying this because all those who are talking should go and learn from Nigeria’s past. Point of sales have been able to operate successfully. Automatic teller machines are working successfully in Nigeria. Nigerian banks can be point of reference of the electoral act in this country. Is the recognition of June 12 enough? What about the resolution of other critical national questions, including restructuring and devolution of power? The national question will be fully addressed. I am a chieftain of the APC. The second term has just started. Give the government a chance. There are too many issues to be attended to and we will not shy away from our responsibilities as the ruling party to ensure the continuity of the unity of this country.

*What was your reaction when you heard that Abiola had died in incarceration?*

Never let us think about it again. It was devastating. It was total devastation. For days, some of us could not reconcile ourselves to it. Sometimes, I still used to think that I am taking to Abiola because we used to talk regularly. For years, it was traumatic. Some people are still saying that, apart from recognising June 12, Abiola should be declared president… You don’t need that again. He has been given GCFR, which is only conferred on presidents. It is automatically a recognition. It is an exercise in futility. The man is gone and he is gone. Are you going to swear him in? Are you going to hang the symbol of the office on one of his children? The award of the GCFR was in recognition of what he passed through and that he was the president of Nigeria.

*Is it not confounding to you that, up to now, the circumstances surrounding his death are still in the realm of conjecture?*

Yes. That is why I told you earlier on that a massive reform of the electoral system must take place. If Abiola had not died and his mandate was restored, what would have happened to Nigeria? I am not a prophet. I don’t claim to be an evangelist. I don’t claim to be a man of God who can predict. He is gone. I don’t want to think about it. There are complaints that Nigeria is lagging behind in all indices of development.

*Would you say the sacrifices made by Abiola have been in vain?*

No. it has not been in vain. You remember that in 2015, we were in a serious economic trouble. If the TSA had not been created, with all monies going into a single account, this country may have even collapsed. We thank God that we are still alive. I believe that this second term, major dividends of the sacrifices Nigerians have made in the last few years will come. Upon reflection, would you say that the Epetedo declaration was a mistake or a right step in the right direction? Don’t let us go back into it. Some of us did not support the Epe Declaration. There was an illegal military government in place. The declaration itself, I don’t want to go into details. Don’t let us do any blame game. Let us thank God that we have had transition, whether perfect or imperfect, from military to civilians. We have heard four governments now from 1999 to 2007, 2007 to 2010, 2010 to 2015, and now 2015 to 2019. It is an achievement for Nigeria, even as imperfect as it is. How can democracy be preserved in Nigeria? We cannot wipe out economic imbalance or poverty. We can reduce poverty. People will continue to resort to religion. People will continue to resort to tribalism. The centre of everything is poverty. The middle class crushes the effects. Once you wipe out the middle class, the economy will collapse. That is the problem.

*What is your message to Nigerians?*

Let us support electoral reforms so that we can have reasonable elections in this country.