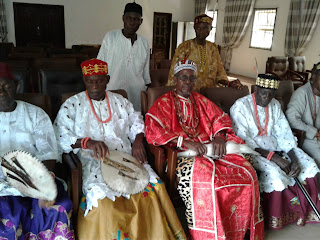 ......as Chief Wille Obiano intervene, in the confusion instituted by Dubem Obaze rages.

The traditional ruler of Ocheuche Umuodo community in Ogbaru LGA of Anambra state has called on his to subjects remain calm, as the governor of Anambra state, Chief Willie Obiano has intervened in the matter, of unwarranted confusion instigated by Chief Dubem Obaze and his brother Oseloka Obaze through the unlawful instigation and installation of another person as traditional ruler after he was crowned on the 24th of April 2019, by the people of Ocheuche Community.

He said that the brigandage by Dubem Obaze and brother runs foul to the process of crowning and recognition of a traditional ruler in Anambra state.

He pitted Dr Steven Akpati who have allowed himself to be used as a tool to bring confusion in the community, and wondered why Dubem Obaze and his brother with go this far, after a their long years of public service in Anambra state.

He stressed that when he was crowned, he did not compete with anyone from his community but it was the handiwork of the obazes to cause disaffection in the community that made them to go and install another traditional ruler after the people have crowned him, just because he did not support PDP in his community during the last election.

The traditional ruler regretted that the obazes are bent on putting confusion in Ocheuche, but he promised not to fight them back, but to ensure that there is lasting peace and justice in his community.

Continuing, he said that they are fighting him, because he supported APGA and Chief Willie Obiano during the last election in the state, and therefore called on the government to be fair and just in handling the matters, presented to the committee set up to look into the unwarranted confusion the obazes are bent on foisting on the people without recourse to the established cultural affinity and laws that govern who becomes a traditional ruler in the community.

As at the time of filling this reports all efforts made to reach Oseloka Obaze and his brother Dubem Obaze proved abortive as their phone numbers were all switched off.
Email Post