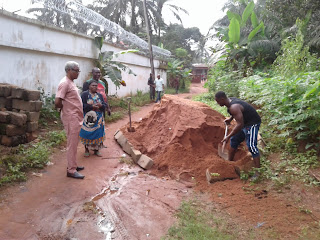 The President General of Ndiakwu community Hon Jude Osumuo, has given a verdict on the closing of a community road by Engr Onwuagha, who employed the services of miscreants to dump sand on Chief Dom Nzewi's close off Chief John Anya's street,  in anticipation to block the road giving access to over 30 families.

He said that Engr Onwuagha does not have the legal right to close such road, as it goes against the law of the community.

In his reaction, Hon Sir Sam Ben Nwosu, the Chairman of Public Complaints Commissioner In Anambra, who happens to be a member of the community, said it was against the laws of communal living and that of the community for an individual to have unilaterally gone ahead to close the road without consulting with the leadership of the community.

He said its a malicious injustice and intimidation to have for any reason closed the road, leading to the house of Chief Don Nzewi.

He stressed that the interest of stakeholders in the community is to remove the blockade placed on the road for peace to reign.

He sounded a stern warning to whoever that has closed the road to desist from further blockage of the road.

It is on record that all the major stakeholders in Ndiakwu came out in one voice to condemn the evil acts and called on security agencies to take note of this injustice as such cannot be allowed in the community any further.

Adding his voice Chief Don Nzewi said he was happy that Ndiakwu community came to his rescue, on the injustice that Engr Onwuagha has proposed to close the road that is older than him is against the norms of communal living and wondered what has led him into this act.

He thanked stakeholders in the community for coming out in mass to stop this injustice for peace to reign in Ndiakwu community.
Email Post