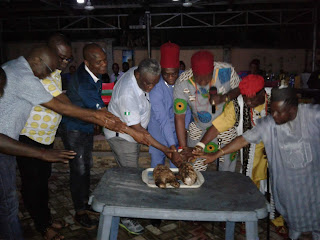 In House Social Club Nnewi, over the weekend celebrated New Yam. The event which was held at Best Option Hotel Nnewi, was well attended with dignitaries from all walks of life.

The President of the Club, Bar Ikenna Obidiegwu, in his keynote address at the event, thanked members of the club at home and in the diaspora for coming out enmasse to celebrate this year's new yam festival, which he said is symbolic, as most of them are not farmer's, but in the same vein go to their different places of work to get what they live on, which is moreso farming.

He stressed that In House Club this year having recorded different milestones in due course will reel out  it's achievements, which is basically humanitarian.

He prayed that God in his infinite mercy will see every member of the club through to another new yam celebration.

In the same vein, the Traditional ruler of Ezinifite Community, HRH Igwe B.S.A Obika, said this year's In House New Yam celebration is a wake up call for Igbo's to think home. He stressed that there is need to strengthen the culture associated with New Yam, so that it will be celebrated and appreciated by our younger generation.

The Onowo of Okija Ichie Osita Ndeogulu, used the opportunity to thank members of In House Club, for finding it worthy to celebrate the new yam, which he said is the symbol of hard work, decipting time of harvest and rest in Igbo land. He prayed that they will all by the grace of God  be alive to celebrate another new yam next year.

The high point of the event was the cutting of the new yam by club members, which was supervised by Igwe Ezinifite, and Onowo Okija.
Email Post