Ekwunife floors Umeh in the Court of Appeal 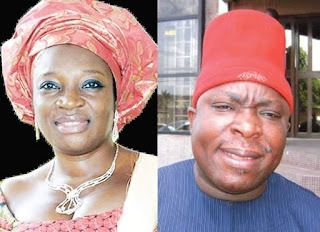 The Court of Appeal, Enugu division, on Friday, at about 2.30pm, delivered judgment on the Appeal filed by Chief Victor Umeh and the All Progressives Grand Alliance (APGA), seeking to set aside the judgment of the Tribunal, which earlier affirmed Senator Uche Ekwunife's election.

Justice Ignatius Igwe Agube, while reading the judgment signed by two other justices, dismissed the appeal filed by Chief Victor Umeh and his party, APGA, for lack of merit.

While agreeing with the judgment of the tribunal delivered on the 9th of September, 2019, Justice Agube stated that the appellant, while challenging the nomination of Senator Uche Ekwunife as the candidate of PDP, wrongly relied on Section 285 (13) of the 1999 Constitution as amended.

Justice Agube also stated that the nomination of candidates is a pre-election matter, which is outside the mandate of the Election Petition Tribunal, hence, the appellant has no business bringing the matter to the tribunal in the first place.

In dismissing 15 ground appeal, Justice Agube stated that substitution is nomination, therefore, the Senator Uche Ekwunife was duly nominated as provided by the electoral act. He held that the appellant, being a member of another political party, had no business challenging the nomination of Senator Uche Ekwunife as PDP candidate.

Justice Agube also held that the appellant failed to prove his allegations of non-compliance.

The judgment, which affirmed Senator Ekwunife's election as the senator representing Anambra Central Senatorial District, brings to an end the contest for the senate seat of Anambra Central.
Email Post