JONAPWD IHIALA Chapter Inaugurated, celebrate End of Year get together 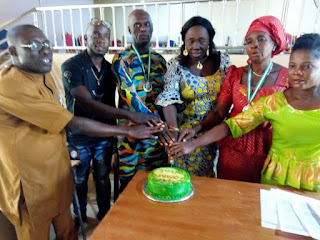 Joint National Association of Persons with disabilities, ihiala chapter was yesterday 29th of November 2019 inaugurated by its state Chairman, Hon. E. C Ugochukwu Okeke amidst fanfare and joy, as members of the association in there numbers from the LGA came out in their numbers to witness the occasion.


While inaugurating the chapter, the state Chairman of the association Hon. Ugochukwu Okeke, commended Comrade Nwanokwara Ncheta for her doggedness in seeing that people with disabilities in the LGA where rally together under one umbrella for their common goal. He tasked the new administration in the LGA to always abide the rules and regulations of the association in carrying out its responsibilities in the LGA.


Hon. Okeke used the opportunity to commend Governor Willie Obiano, whom he described as God sent to them. He handed over to the LGA Transition Committee Chairman Hon Barr Gregory Okafor the law signed into law by the Governor will stipulates about the welfare and well being of people with disabilities in the state, and tasked him to work with the newly inaugurated executive, led by Comrade Ncheta.


While delivering her inaugural speech at the event Comrade Ncheta Nwanokwara thanked everyone that found time to be with them, especially Chief Ken Maduakor, whom she described as a very good friend of the association in Ihiala LGA.


She enumerated the many achievements of the association in ihiala to include creation of awareness about potentials of persons with disabilities, empowerment of there members with grinding machine, two sowing machine and a generating set. Mobilization of their members in four communities of Okija, Ihiala, Uli and Azia with the instrumentality of the Church. She however stated that the registration of their multipurpose co operative society was made possible by the assistance of Hon. Paschal Agbodike and Hon Chidi Udemadu.

She said that Automatic employment of PWD's in the state, where two of their members benefited in the persons of Nwokedi Amara from Ihiala and Ezenwa Clara from Amorka among numerous other achievements of the association in ihiala, is a credit to the many achievements they have recorded in the past.

She however stated that they have challenges which include lack of equal opportunity and participation in community development, inaccessibility of town halls, hospitals, churches and other public buildings by the members because of the architectural design of such edifices. She lamented the lack of permanent accommodation for our monthly meetings, lack of funding to reach out to their members in the remaining six communities of Amorka,Mbosi, Lilu,Isseke, Ubuluisiuzo and Orsumoghu.

She therefore requested for subvention or donations from the public for the smooth running of the association, an office accommodation, a bus for easy movement and employment opportunities for their qualified members.

The occasion also doubled as their end of year party celebration where Almighty God used Chief Ken Madukakor and others too numerous to mention to bless them immensely.
The highpoint of the event was the swearing in of the new administration of the association in the LGA, cutting of the end of year cake and presentation of Noddles and cash gift to the association by Chief Ken Maduakor who happens to hail from Ihiala LGA.
Email Post