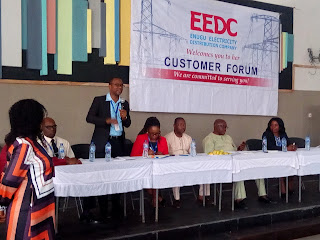 ...... As Customers in Nnewi Insist they won't subscriber to MAP.

The EEDC customer forum, which was supposed to be an interactive section with the management of EEDC and there customers in Nnewi district was yesterday stalemated as customers in Nnewi rejected the offer of subscribing to the proposed regime of changing new meters for there old ones, which the customers said were still active, but where deactivated, as a measure to rip them off, and for EEDC to sell new ones to them.

In the question and response answer section, where most notable Nnewi indigenes spoke, bashed the team that came, whom they described as being on a mission to insult their sensibilities. They wondered how, they asked them to come for a town hall meeting, without adequate preparation to address Ndi Nnewi, in an important issue as electricity.

In his submission, Ambassador Odi Nwosu, lamented the lackadaisical attitude of the staff and management of EEDC towards the issue of metering, which a petition was been submitted to appropriate quarters. He was sad to note that instead of the MD/CEO to have come for an important meeting as this, a security officer was sent to them.  He inferred that if EEDC management who assumed they have over 1 million customers in the South East, and have only been able to distribute 149,000 meters in a space of two years, he asked, what is the rationale, therefore in withdrawing the existing meters to replace with new ones. That they should be looking at how to capture the customers who are not on the smart metering circle, instead of withdrawing them from the system.

He maintained that they have written a petition demanding that their meters should remain with them or EEDC takes care of the cost of replacing the new meters. He stressed that they are ready to pursue it to a logical conclusion to see that justice is done in the matter, as Ndi Nnewi cannot continue to live at the mercy of EEDC, because of their monopoly.

In the same vein, Dr Ajulu Uzodike, the former MD of Cutix PLC, who is also from Nnewi, said that the issue of going back and forth on the matter is irrelevant, asking that EEDC should revert back to the status quo or be ready to go to court with them. He lamented the high level of inefficiency of the company towards the distribution of energy in the town with special emphasis on the issue of metering, with loads of discrepancies here and there.

Mr Frank Ejiofor, who represented the MD/CEO of EEDC tried all he could to explain to the crowd that the company meant well, but all fell on deaf ears, as the already agitated crowd were hell bent on getting there pound of flesh from EEDC, because of the incessant complaints that has been occasioned by inefficiency of the staff and Management of EEDC, especially in Nnewi District. The meeting was however stalemated as no agreement was reached, as the director of security, EEDC, Mr Frank Ejiofor a former DSS Director, asked that EEDC, be given 48hrs to resolve the matter.

While interacting with newsmen Mr Frank Ejiofor said that the issue will be resolved as they can't quarrel with their esteemed customers. He said that their complain has been noted and the company will look into it to see how it can be resolved.

As it stands, if EEDC management does not renege on there stand to continue with MAP and to revert back to the status quo, the long standing battle will still continue. This is so because of the series of complaints from electricity customers in Nnewi District and environs who are afraid of estimated bills, that the company comes with every month, when sometimes there is no supply of electricity. We will follow this development and keep you abreast of its final conclusion.
Email Post