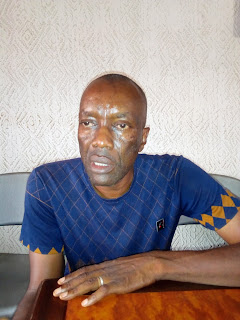 The Chairman of the Fairly used and New Motorcycle dealers Nnewi, Hon Eloka Ubajekwe has commended Chief Willie Obiano for coming to their aid in seeing that the erosion menace of 100 Foot Road in Nnewi which has started causing havoc in the market was stalled, by the mobilization to site of an engineering company to ensure the project is completed and on time too.

Hon. Eloka, while interacting with newsmen in his office yesterday, said that before now, that the erosion had already consumed more than 3 warehouses in the market adding that they almost lost hope, because of the rate the erosion was advancing by the day. He said " we prayed in October of 2019 that God should send someone to come to our aid, to avoid the impending danger the erosion site posed to us in the market, and in January 2020, our action Governor moved into action, I think you need to visit the site to see for yourselves the extent of work there, which is indeed heart warning"

On the Obiofia Nnewichi erosion menace, Hon. Eloka Ubajekwe also thanked the Governor for coming to their aid, by paying the counterpart fund for the mobilization of the international agency handling the project which he said has advanced and is nearing completion.

Hon. Eloka, however stated that his market is happy to be associated with the present government in the state, as the government has made markets in the state, his top priority. He said that peace and oneness of purpose has returned to FUMDA because of the proactive measures he put in place by ensuring that stolen motorcycles and phones are no longer bought or sold in the market.

He therefore promised to support the efforts of the Anambra state government to drive development and sustain the growth already made through the government of Chief Willie Obiano.
Email Post