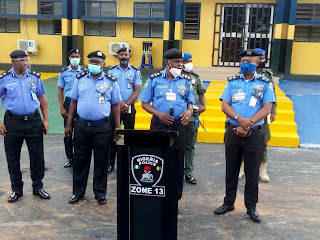 The Assistant Inspector General of Police for  Zone 13, Zonal Command, situated in Ukpo, Dunukofia LGA, Anambra state, AIG Danmallam Muhammed, has officially resumed work at the command, with a call on all police commands in Anambra, Ebonyi and Enugu states respectively to work in synergy to fight crime and criminal activities in the zonal command.

He made this call today, while briefing newsmen at the zonal command headquarters at Ukpo, Dunukofia LGA of Anambra state. He hinted that after a closed door meeting with all the 3 commissioners of police in the zone, they resolved to fight every form of criminality in the zone to a stand still.

The AIG, further stated that the new Zonal command under his watch will follow the precepts of constitutionalism, due process, and rule of law and order which is main constitutional role of the police.

He assured, members of the public in these 3 states where the command has jurisdiction, about the safety of lives and property. He promised to defend, protect and secure the fundamental human rights of citizens in his zonal command, as enshrined in the constitution of the federal republic of Nigeria.

AIG Danmallam Muhammed, sounded a note of warning to trouble makers that under his watch that there won't be any form of illegal detention, extortion of money from the public, killings, kidnapping and other criminality in the zone.

He however promised to institute a policy in his command which will make sure zone 13 is adequately covered in synergy with other security agencies, anchored under community policing of the IGP.

He therefore asked the members of the public to feel free to report criminal activities in the areas and be rest assured that their identity will not be exposed, so as to ensure the safety of all.
Email Post