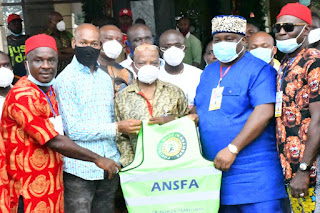 By Kamen Chuks Ogbonna
The major stakeholders of football in Anambra  state comprising of all the local govt F.A chairmen,the referees chairman,observers  etc yesterday had a congress which is the constitutional requirement at the tail end of every tenure in preparation to ushering in a new tenure of executives for the
Association.
This process culminated yesterday evening with the unanimous election of Senator Dr Ifeanyi Ubah with a fresh mandate to continue from where he stopped in the last dispensation as the Chairman of Anambra Football Association.
Immediately after the election, the Senator who  was a bit surprised by their gesture expressed joy, that his efforts in the past was appreciated, and assured them that he will not abandon them at this point in time but will rather take up the task with vigour in the quest to achieve maximum impact by tapping fully into the potentials that abound in football driven economy and by so doing further empower our talented youths by helping them achieve their full potentials amongst other sound developments in the round leather game.
It is true that another person in his shoe may turn it down, because of the pressure associated with the upcoming gubernatorial polls in the state in which he is already the leading candidate to beat but Senator Dr Ifeanyi Ubah, in his magnanimity took up the task. 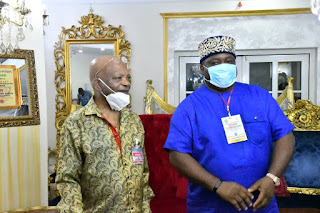 Like he told me in the car while on our way to pay a courtesy visit to  Chief Engineer Authur Eze (Ozo Igbo Ndu Worldwide) ,he said " Kamen,  any opportunity i get in keeping  my promise to God by touching lives , I will never relent in doing with joy  "
After his acceptance speech which was greeted by massive joy reverberating within and outside the hall,
venue he invited them to accompany him to visit the Prince of Ukpo kingdom whom he was already billed to visit as one of the major stakeholders of Anambra that he must return to pay homage to whenever he is back to the state
We were all warmly welcomed at the fortress of the man whose milk of human kindness and love for our people is now legendary and at a point during the visit ,everyone joined the Distinguished Senator who couldnt hold back any longer at the melodious worship  songs coming from the standby choir in the house of his host and started dancing in praise of God's goodness like the biblical David in the bible 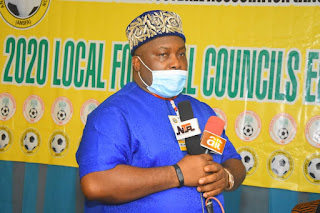 The Prince of Ukpo kingdom and foremost philanthropist Chief Eze in his brief speech later ,  expressed his joy at the visit and took out time to specially praise what he referred to as the similar spirit of helping people and touching lives that exist between himself and Senator Ubah. He narrated to his audience some incidents in the past that showed just how Senator Ubah is so passionate and emotional about people's welfare and noted his outing  too in the red chambers in regards to the zone 13 brought to us in Anambra state .
The visit ended in merriment and jovial 'remarks .
A particular statement that Prince of Ukpo kingdom  made  stood out for me on  that visit
He said....
"Amongst all these people  talking about coming to rule Anambra, you are the only one that has "address" " .
I will end by saying big Congratulations to the members of Anambra Football Association for their wisdom and dexterity by holding tenaciously onto their worthy Son and congratulations to the Dstinguished Senator too 'maka na obu ka onye si eme ka ekwe si akpo ya "
#FootballDrivenEconomy
#DivineMandate
#InTouchWithTheGra
Email Post