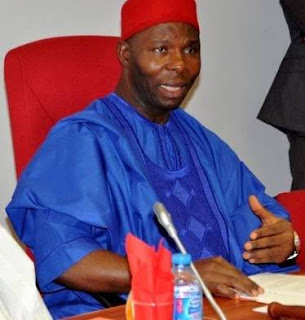 The Senator representing Enugu North Senatorial District has further dispelled the wicked rumours by enemies of progress, about the Senator Dr Patrick Ifeanyi Ubah, on the durability of Innoson Vehicles at the Senate.
In a press release, made available to newsmen after a press briefing at the Senate, Senator Utazi stated emphatically that Senator Dr Patrick Ifeanyi Ubah represents the new face of Ndi Igbo and progress in Nigeria.
He stressed that "It pleases me to make this press release clarifying my point of Order, bordering on personal explanation on the quality of innoson vehicles that they are durable and should be patronized by the National Assembly"
Senator Utazi said that as a committed and patriotic Nigerian, he  condemns unequivocally the negative publicity against the vehicles produced by Innoson Vehicles Manufacturing Company Limited, because he is convinced for a fact, that such claims were false, misleading, mischievous, reprehensible and against the giant strides so far made by Chief Innocent Chukwuma (IFEDIASO) 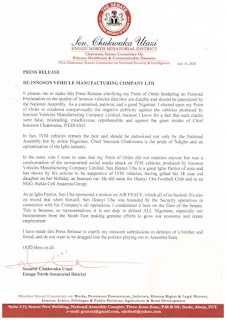 Senator Utazi went further to state that, IVM vehicles remain the best and should be patronized not only by the National Assembly but by Nigerians.
He maintained that, Chief Innocent Chukwuma is the pride of Ndigbo and is an epitome of the Igbo industry, and should be encouraged instead of being disparaged.
He however stated that his point of Order did not mention anyone but dwelled on the condemnation of  unwarranted social media attack on IVM vehicles produced by Innoson Vehicles Manufacturing LTD.
He averred that Sen Dr Patrick Ifeanyi Ubah is a great Igbo patriot of note, and has shown this by his actions to be supportive of IVM Vehicles, having gifted his 18 years old daughter on her birthday an Innoson car. He did same for Ifeanyi Ubah Football Club (FCIU) and to an NGO, Sickle Cell Anaemia Group.
Senator Utazi went further to recount that, as an Igbo patriot, Sen Dr Patrick Ifeanyi Ubah sponsored a motion on AIR PEACE, which all senators backed.
Senator Utazi said "It’s also on record that when himself, Sen Ifeanyi Ubah was hounded by security operatives in connection with his company’s oil operations, I condemned it here on the floor of the Senate"
"This is because, as representatives, it is our duty to defend All Nigerians especially our businessmen from the SouthEast making genuine efforts to grow our economy and create employment."
Senator Utazi opined that he made the press release, to clarify his innocent submission in defense, of a brother and friend, and do not want to be dragged into the politics,playing out in Anambra, as Senator Dr Patrick Ifeanyi Ubah represents the new face of Ndi Igbo.
Email Post