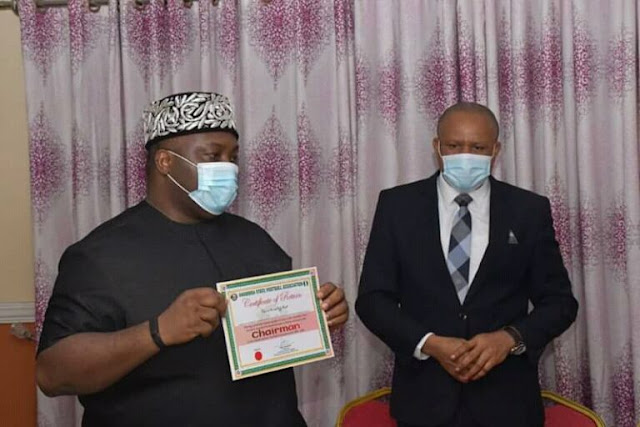 The newly elected members of the Anambra state Football Association led by Senator Dr Ikemba Ifeanyi Ubah were yesterday sworn in by the electoral Committee presided over by Rev Fr Obinna Dike.
At the swearing in, the FA chairman and others were issued with certificates of return. The FA board as well as the elected local govt FA Chairmen of all the 20 local football councils were equally inaugurated.
Recall that the elections held on August 2 with Rev Obinna Dike serving as the Returning Officer for the LFC ( local football councils) while Barrister Godwin Madubuko served as the Returning Officer for the board elections.
The newly sworn in Anmabra FA Chairman as well as the board members in their remarks during the course of the inauguration took out time to specially commend the electoral panel for a job well done especially their successful exploit in being the first to hold a virtual election in football in Nigeria.
The elected FA Chairman Distinguished Senator Dr Ifeanyi Ubah, who was sworn in as the FA Chairman of the State for a fresh four year tenure assured the football body in Anambra that he will continue to pilot their affairs as he has been doing all these years even in the face of total lack of patronage/funding from the state govt.
The event held in total compliance with all CONVID-19 safety protocols .
Meanwhile, it is unfortunate that Gov Obiano whose administration tried to frustrate the FA from holding its election has not funded the Anambra FA since he became governor.
AIF Media gathered that the Anambra FA has been begging money to fund its activities like street beggars until Senator Ifeanyi Ubah became the FA chairman and has been funding the state FA singled handedly.
Ifeanyi Ubah gave Anambra state FA a national and continental recognition. During the 2018 World Cup, he took many football enthusiasts from Anambra to witness the tournament at Russia. Presently, he is a member of CAF nation’s cup organising committee.
During the CAF election, Ubah was instrumental to the election of the incumbent CAF priesident.
At the local league, the FC Ifeanyi Ubah is doing Anambra state proud having won the FA cup and remained the only club owned by an individual that’s playing at the premier league.
He will in the next four years take Anambra state FA to a greater heights.
Credits: AIF Media.
Email Post