Suspects reveal how money is transferred from victims’ phones 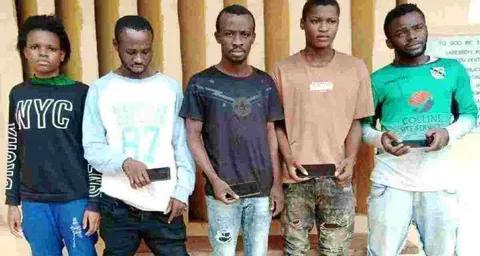 Police in Lagos have arrested five suspects who specialised in stealing mobile phones to withdraw money from owners’ accounts.

They had stolen a Samsung X9 phone in a barbing saloon, in Lekki, two months ago, from where they successfully withdrew N2.3 million.

The suspects said that they did not need an insider connection in banks to transfer money from stolen SIM cards.

They claimed they had codes that could facilitate the change of owners withdrawal pins.

During interrogation, one of them, Asigbe, said: “I stole the phone and gave the SIM card to Ikechukwu, who got the owner’s BVN. He sent the BVN number to Yele [at large], who generated the account owner’s transfer pin.

“We don’t have a bank insider, we bypass them because we get all the information we need to transfer money from stolen phones through some codes”.

Spokesperson of Zone 2 Police Command, Onikan, Lagos said that investigation was ongoing and that the suspects would be charged to court upon completion, for prosecution.

DSP Hauwa Adamu added: “Meanwhile, members of the public are hereby advised to quickly draw necessary attention in the event of loss of their mobile phones or other valuables.”