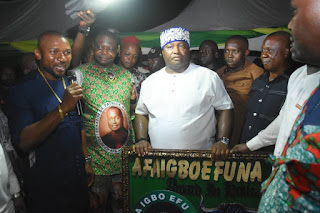 The Distinguished Senator representing Anambra South Senatorial District, and Founder of the pan igbo socio-cultural organization, Afaigboefuna Dr. Patrick Ifeanyi Ubah on Sunday, reiterated his commitment towards the  advancement of the Igbo economy and promoting the norms and values of the Igbo Nation.

The Distinguished  Senator made this known while addressing members of the Afaigboefuna group during their 2020 end of year party at Emmaus House Complex Awka.

According to Senator Ubah, the advancement of the economy of the Igbo nation remains a task that must be accomplished. He  thanked the group members for their efforts towards promoting the norms and values of the Igbo nation and reassured the people that they will continue to get his backing and support.
He also donated four million naira in support of the group's activities.

Responding, the pro Igbo Welfare Organisation  through its state Coordinator, Hon. Mba Mba Iloka thanked the Senator for his selfless contributions towards the promotion of the well-being of the people. Hon. Iloka commended the Distingushed Senator  for always standing up to defend and promote issues that concern the average onye Igbo at the red chambers as well as  the quality Bills and Motions he has  sponsored so far at the upper chamber and urged him to keep the good works up. He also reassured the Senator and ndị Igbo that the group will never relent in championing and  promoting the norms and values of the Igbo Nation.

Another dignitary that addressed the people at the massively attended event was the Chief Executive Officer of Pillars Energy, Comrade Pius Njoku. In his  brief remarks,Comrade Njoku commended Senator Ubah for his foresight  in founding and supporting the group's activities, noting that the promotion of pro Igbo norms and values remains a vital task for every Igbo son and daughter, and urged the group to continue making ndi Igbo proud. The Pillars Energy boss also made a donation of one million naira in support of the group's activities.

Other highlights of the event include; the presentation of Outstanding Leadership Award to the group's founder, Senator Dr. Patrick Ifeanyi Ubah and presentation of Mayor of AfaIgboEfuna Award to Pillars Energy boss, Comrade Pius Njoku.