The Transition Chairman of Ogbaru Local Government Area, Hon. Arinze Ayogu; and the traditional ruler of Atani, Ogbaru LGA, Igwe Azuka Ngoddy, have been fingered in the death of a member of Atani Council of Chiefs, Egbuna Mbanefo, who was murdered at his place of work in the community on April 1, 2021.

Egbuna Mbanefo, it was gathered, went to a building site on the fateful afternoon of April 1, to do a manual job, but did not return alive. Nigerian Notch gathered that, his body was found at the building site the next day, when his friends and family members went out on a search for him.

A member of the community, who craved anomity, said that the deceased was his paternal uncle, as he linked the tragedy to a land dispute, which he said, involved a large portion of land belonging to Umuoniha kindred in Atani community of Ogbaru LGA. 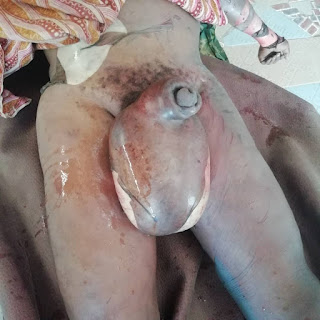 According to him: “Umuoniha Kindred has very massive land at different areas within Atani community, and it happened that a particular group in the kindred called Ogene family resorted to selling the land belonging to the kindred in general, without the consent of the family while they told buyers that the land belonged to them alone.

“I have a farm in one of the lands. One day, workers in my farm were arrested and taken to Atani Police Station. When I went there to know what happened, a certain man called Uche Mbanefo surfaced, and said my farm was part of 450 plots of land his brother based in the USA bought from the Ogene family. I secured the bail of my workers and left.

“Days after, I went to my farm and saw some beacons. I removed them. Later on, chairman of Ogbaru Local Government Area, Hon. Arinze  Awogu, came to us and said that the piece of land belonged to him. He told us that he bought 150 plots of land from the Ogene family.

“Another day, we went to the farm, and noticed that there were beacons in some other parts of the land. We verified the beacons and noticed it has the name and phone number of the traditional ruler of Atani. Igwe Azuka Ngoddy put the beacons, because, we saw his name and phone number on them. We called him; he confirmed that he bought some plots of land from the Ogene family; though he did not disclose the quantity. We told him that the land belonged to our kindred, not a particular family, and that those lands were not for sale.” 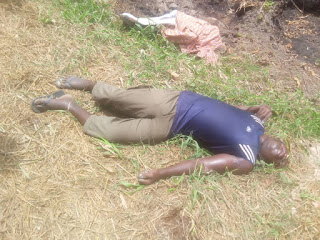 He stated that they have incidented the matter with the police, but it's unfortunate that the police has not done anything to bring the culprits to book. He also decried the fact that the Traditonal Ruler and the TC Chairman because of his intrest has not also done anything.

According to him, on March 30, 2021, the Umuoniha kindred, as a way of checkmating incessant encroachment and sale of the communal land, sent Egbuna Mbanefo to announce to the community that nobody, including natives and visitors, should buy land from the Umuoniha land, as it was not for sale. According to him, when Egbuna was doing the announcement, the new youth president appointed by the traditional ruler, Chukwudi Ogene, attacked him, and took away the instruments he was using for the announcement; while threatening to kill and squash his testicles with the gong. Egbuna was murdered two days after his encounter with the youth president.

The agrived community member, whom the uncle Egbuna was murdered in cold blood has kept pointing accusing fingers at the local government chairman, Arinze Awogu, and the Atani traditional ruler, Igwe Azuka Ngoddy, whom he is accusing od sponsoring the killing of Egbuna Mbanefo because of their interest in the land. He therefore appealed to the authorities to intervene, and restore normalcy to Atani, which, according to him, have been a peaceful community.

“No story of this kind has been heard that a citizen of Atani went to his place of work and was killed. It has never happened before.  He said that it's unfortunate that the local government chairman, being an Atani person, was involved in the land scandal that led to the death of Egbuna Mbanefo; but has remained slient ever since the death of Egbuna for reasons best known to him and has said or done nothing about the death. The traditional ruler of Atani, being the number one citizen, as well as the chief security officer of the community, was aware that the deceased was a member of the Atani Council of Elders, as well as a town crier in the community; but when he was killed, the Igwe did not say anything, because of his vested interest in the land.

He said that in the past, Atani community sanctioned some members of the Ogene family because of their involvement in destroying people’s buildings, and for bathing a member of the community with acid, including the kidnap of a woman who was saved by a palmwine tapper. He said that It was the Igwe that singlehandedly lifted the sanction because of his interest in the Umuoniha land,” he concluded.

When Igwe Azuka Ngodi was contacted to understand his level of involvement in the dispute, he said he did not know from onset that the land in question was in dispute.

He said: “I was in the United States when one of my workers informed me that there was a parcel of land for sale. He told me the land was genuine, so we bought it,” he said; adding that the death of Egbuna Mbanefo had no link with the land dispute.

“There was no link between the land dispute and Egbuna Mbanefo’s death. Nobody killed him. He collapsed and died at a building site where he was working. It was believed he was having heart related problem. He died and his family wanted to use his death to score a point in the dispute,” he said.

But investigations carried out and the pictures attached in this publication shows that he was murdered and his testicles removed according to the threat handed over to him when the deceased gong was taken away from him.

When contacted the Transition Chairman of Ogbaru Local Government Area, Arinze Awogu, acknowledged that he procured 150 plots of land from the disputed area; but said that he made the purchase on behalf of an agro company, which consulted him for that purpose.

“A company that is into agro business consulted me to procure some hectares of land for it. That was how we came about buying the land. It is not my personal property,” he said.

On the allegation that he appointed a member of Ogene family councilor as compensation for the land they sold to him, Awogu said: “The young man was made councilor in 2019, and the land was bought in 2021. How has the appointment made earlier become compensation for land purchased later?”

On the death of Egbuna Mbanefo, the council boss said that the affected family should make proper report to the police, indicating the person or persons suspected to be involved in the murder, if any.

Several efforts made to get reactions from members of the Ogene family, who were accused of murder and sale of communal land, was not successful as at press time. Text messages sent to the community’s youth president, who is also a member of the Ogene family, was not replied. Subsequent calls put across to him to react on the allegations were not answered as at press time.