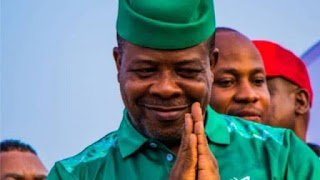 The former lawmaker also lambasted overzealous supporters for writing against the nomination describing them as "fifth columnists".

In a statement, 5 days after the nomination, media aide Chibuike Onyeukwu said Ihedioha had come to accept the decision taken by party stakeholders in the zone and had reached out to Sam Daddy to be carried along.

But supporters are not to blame. Ihedioha fell mute soon after Sam Daddy's emergence prompting his loyalists in the state chapter to issue all manner of disclaimers and counter narratives vowing that Ihedioha would upturn the decision.

Ahead of the PDP's convention, the crucial post of national secretary was zoned to the South East and subsequently ceded to Imo State. Ihedioha, sources say, had asked for sole right to nominate a candidate. Critical party stakeholders citing his selfish but weak electoral outings instead chose his arch rival, former Senator Samuel Anyanwu a.k.a. Sam Daddy, as consensus candidate last Thursday.

Both men hail from the same Imo East senatorial district better known as Owerri zone and are interested in the 2023 governorship race. Analysts see Anyanwu's rise as a barrier to Ihedioha's 3rd attempt at the party's guber ticket.

Sources say Ihedioha explored all possible avenues to scuttle the nomination to no avail and eventually succumbed to the will of the party.

"Imo PDP remains a united family...", wrote Mr Onyeukwu, "Any attempt by fifth columnists to cause disaffection, especially among its leaders will not work."

Since only Ihedioha's loyalists had challenged Anyanwu's sole nomination, analysts say such callous reference amounts to throwing supporters under the bus.

"Ihedioha is fond of underrating people," a chieftain of the party told this reporter in confidence.

"Since Sam Daddy challenged the outcome of the 2018 governorship primary which we all know was rigged to favour Ihedioha, they had completely marginalized him. Now they want to make us believe Ihedioha is behind his emergence. Who is fooling who?

"In the first place, as a good partyman, is Emeka [Ihedioha] supposed to wait a whole 5 days before congratulating Sam Daddy or even urging his structure to support the nomination? Why did he not call his henchmen to order the moment they began to disparage the party's decision?

"Let us watch and see. But one thing is for sure, Emeka has become the underdog and Imo PDP will never remain the same."