Pope Francis has declared the death penalty “inadmissible” and “an attack on the inviolability and dignity of the person”, promising the Catholic Church will work towards its abolition around the world. 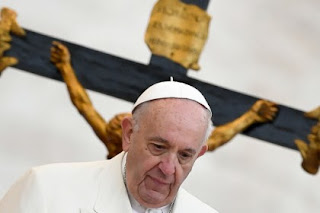 The change, which has been added to the catechism of the Catholic Church and is therefore now official teaching, formalises a position that the Pope has articulated since becoming pontiff five years ago.
Vatican spokesman Greg Burke told CNN: “The key point here is really human dignity. The Pope is saying that no matter how grievous the crime, someone never loses his or her human dignity.
“One of the rationales for the death penalty in Catholic teachings historically was to protect society. Obviously, the state still has that obligation. That is not being taken away here, but they can do that in other ways.”
Historically, “the Church has mostly been unopposed to the death penalty, including into the 20th century”, reports the BBC.
In 1952, Pope Pius XII said it was not a violation of the universal right to life and even Francis’s predecessor, Pope Benedict XVI, wrote that the death penalty could be permissible in some cases.
“In approving this change, Francis has sent a signal about his priorities - and his posture toward chang0,” says The Atlantic. “The Church has underscored its opposition to the destruction of any kind of life, even when that means defying the state.”
The change in stance “will be a big deal for the future of the death penalty in the world”, said John Thavis, a Vatican expert. “People who work with prisoners on death row will be thrilled, and I think this will become a banner social justice issue for the church.”
According to Amnesty International at least 993 state executions took place in 23 countries last year.
The Pope's declaration “may have particular resonance” in the US, where capital punishment remains legal in 31 states and as a federal punishment, reports CNN.
The New York Times says his decision “is likely to put many American Catholic politicians in a difficult position, especially Catholic governors” who have presided over executions.
For the ninth year running, last year the US was the only country to carry out executions in either North or South America.
But support for the death penalty for murder in the US is on the increase, after hitting a 40-year low in 2016. According to the Pew Research Centre, 54% of Americans now favour the death penalty, including 53% of Catholics.
Some Catholic commentators say the Pope risks setting off “a backlash among Catholic traditionalists who already cast Francis as being dangerously inclined to change or compromise church teaching on other issues,” says The New York Times, “such as permitting communion for Catholics who have divorced and remarried without getting a church annulment.”
Email Post