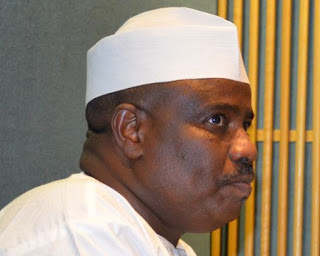 The Governor of Sokoto State, H.E Aminu Tambuwal of has aganist all speculations decamped from the ruling All Progressives Congress to the main opposition, Peoples Democratic Party PDP.
Mr Tambuwal, who is said to be nursing a presidential ambition, called on Nigerians to vote out President Muhammadu Buhari in next year’s election, considering the ineptitude of the current administration which has reflected bad governance in all circles of the National economy.
He said Mr Buhari has been “ineffective” as president.
Mr Tambuwal was of the view that he decided to leave the APC because President Muhammadu Buhari has failed the nation and should be voted out in 2019.
Tambuwal left the PDP to join the APC in 2014 as part of the “new PDP” bloc.
His defection is expected to be a part of Mr Tambuwal’s presidential ambition.
Mr Tambuwal is a close ally of Governor Nyesom Wike of Rivers state who is arguably the leader of the PDP at present after his loyalists emerged leaders of the party in its December 2017 national convention.
A source, who was privy to the development, told us that Mr Tambuwal convened a meeting of some top government functionaries and supporters last week and “allowed a free discussion on why he should defect or not”.
The source said Mr Tambuwal made it clear he had to leave because of what he referred to as the “betrayal by some of the APC leaders in the region”.
“As soon as it became evident members of the new PDP have become targets of the current administration despite their huge support for its success in 2015, it was resolved that members of the new PDP from Sokoto, Zamfara and Kebbi states should take a collective decision about their political future,” the source said.
“The leaders from the region including the governor’s predecessor, Aliyu Wamakko and former Kebbi state governor, Adamu Aliero, suggested that governor Tambuwal should be the coordinator and face of the new PDP decision from the region”.
“However, the governor was shocked to realise that after pushing him ahead, the other leaders decided against the collective decision taken and left him in limbo, that made him realise what game is being played and he decided to take his future into his own hands,” he said.
Another source at the meeting also told us that it was resolved that a small committee be set up to find a way out and to report back on today.
“From all indications, that committee has not made any serious headway and the governor will leave the APC with his loyalist today,” our source said.
A spokesperson for the governor could not be immediately reached for comments for this story.
Email Post